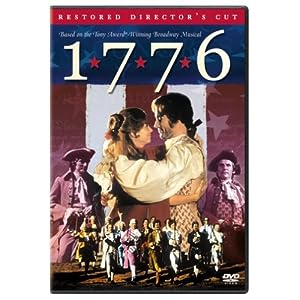 “1776” is the greatest historical musical Broadway ever produced. It brings to life the patriots of the Continental Congress, who struggled to kick-start this country’s freedom and write the Declaration of Independence.

The movie version should be televised every July 4th to celebrate the birthday of this free nation. It should be mandatory viewing in every school social studies curriculum in this country. Through its stories, songs, and sense of humor, “1776” brings history to life. But in the middle schools of Fairfax County, Virginia, “1776” has been banned. Why? Because of a mild verbal exchange in the screenplay.

John Adams (William Daniels, in a tour de force performance) and others are trying to convince Thomas Jefferson (Ken Howard, also excellent) to write the Declaration. Jefferson rebuffs Adams, explaining he is leaving Philadelphia to return to Virginia, because “I’ve not seen my wife in six months.” Adams replies, “Jefferson, will you be a patriot, or a lover?” Jefferson pauses and announces his choice: he’ll be a lover. Adams — who is obnoxious and disliked — won’t give in. He insists, demands, and cajoles until Jefferson complains that he “burns” for his wife.

It is that word, “burns,” that is apparently too much for the Virginia schools. How ironic that this mild innuendo — and that’s elevating it far beyond its rightful level in the lexicon — would be deemed too much for students in Jefferson’s home colony to hear. That this is happening in the year 2004, when real sexual language is pervasive in music, TV, radio (and certainly in the schoolyard), makes it even more ludicrous.

What are the Virginia school bureaucrats afraid of? That they’d have to explain the meaning of the words in that scene? It’s not like Jefferson says he burns because of his wife (then you’d have to explain STDs to the kids), but rather for his wife, a concept which can be easily explained, without even bringing sex into it. Tell any inquisitive kid that it is Jefferson’s love for his wife that burns inside him. That’s simple. So simple, in fact, that if you can’t handle this one, you shouldn’t be an educator.

Of course, it’s not the educators who made this decision.

As one teacher protested in an anonymous e-mail to the school board and community leaders: “Teachers are far better able to determine what material is suitable for teenagers than administrators who have not been in the classroom for years or attorneys whose job it is to protect the school system from the complaints and concerns of a few parents who have a political axe to grind. In the last 10 years, [the school system] has increasingly based educational decisions on fear instead of strength.”

My wife and I own a DVD of “1776” and have shown it to our elementary-school-age daughter. She loved the songs and the story. When we traveled to Philadelphia last summer and went to Independence Hall, she saw the very rooms where the Continental Congress met and remembered everything about them, thanks to the movie. We plan to watch it with her many more times.

If the parents of Fairfax County, Virginia, are smart, they’ll rent or buy a copy of “1776” and show it to their kids. Then everyone can understand how contemptible it is that a great movie about liberty is being denied to those who are learning about liberty and who could benefit from it.

This column originally appeared as an op-ed piece in the St. Louis Post-Dispatch