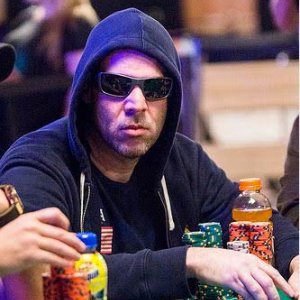 Coverage of the final table of the World Series Of Poker Main Event began last night on ESPN. The six members of the November Nine who are still standing will return tonight to play down to the final three, who will complete the competition for the $7.7 million first prize tomorrow night.

ESPN is again showing all of the action on a 30-minute delay so that we can see the players’ hole cards without that information getting back to them during a hand. It also allows analyst Antonio Esfandiari to explain to broadcasters Lon McEachern and Norman Chad why and how the hands will likely play out. Antonio is really good and his insight makes the slow, boring process of playing poker more palatable to a television audience.

Yes, I just called poker slow and boring because most of the time, the overwhelming majority of players fold their initial two cards. When I’m playing in a cash game, I always hope to sit at a table of talkers who will engage in conversation to help while away the hours. It also helps if there’s a TV nearby showing a sporting event (preferably an NFL game). Anything to distract from the tedium of just sitting there doing not much of anything except looking at other people who also aren’t doing anything.

What makes this worse in a live game is when a player takes forever to act. It’s okay to “tank” for a minute or two when you’re faced with a tough decision, but those should be rare. Most of the time when you look at your cards, you know what you’re going to do. Even if you play the hand, it shouldn’t take very long to assess each situation, make a decision, then check, fold, bet, or raise. And by “very long,” I mean less than 10 seconds.

Some players push the limits, pausing for too long every single time the action comes around to them. This is pure annoyance, particularly pre-flop, when they’re folding a high percentage of the time. I understand they don’t want to give away any tells, but when you do it over and over again, you’re not protecting your secrets, you’re slowing down the game.

Zvi Stern was the worst offender during last night’s WSOP coverage (and will be again tonight). With his hoodie up and his sunglasses on, he’d sit still for an eternity before folding, bringing everything to a full stop. This made for horrible television and is a very bad image for our game.

That’s a problem because poker needs more people. We need to attract more players, particularly more women. But when a casual player — who is used to the fun social side of poker from playing a $20 tournament with friends in someone’s basement — tunes in and sees that, they get turned off. It’s not just intimidating, it’s alienating. I’m an experienced player and I hate it, so I can imagine how painful it is for someone who is used to the pace of the highly-edited television poker they’re used to seeing.

The non-live WSOP shows that ESPN runs the rest of the year, or other series like the World Poker Tour and Poker Night In America, are essentially a highlights reel of a tournament or cash game. Many hours of play have been whittled down to an hour or two of airtime, during which you’re shown only the hands that make for good visuals or interesting strategy or involve a well-known player. Those edited shows don’t show you the drudgery of folding, folding, folding, and waiting for some young stud wasting time as if he’s being paid by the second.

There’s already a poker rule wherein anyone at the table can “call the clock” on a player who’s taking too long, but it is rarely invoked. When it is, the floor supervisor comes over and tells the stalling player they have sixty seconds to act before their hand is declared dead. Although I’ve been tempted a time or two, I have never called the clock on an opponent, although I’ve had it called on me.

Several years ago, I was playing a cash game at the Horseshoe Hammond involving quite a bit of money. I won’t go into all the details, but on the river, I bet and my opponent raised. I knew I had the best hand and was trying to decide how much to re-raise so that I could get more of his chips. After I’d been silent for about a quarter-minute, a player who wasn’t in the hand called the clock. I looked over and said, “It’s only been fifteen seconds!” He replied, “Come on, you know you’re going to fold, let’s go!!” He implored the dealer to call the floor, who came over and gave me the sixty-second warning. I tried to block all of this out and think, and as the countdown got to single digits, I announced, “I’m all in.” My opponent immediately mucked his cards and I pulled in the pot, glaring at the guy who had called the clock on me.

If I had been in the tank for a few minutes, he would have been within his rights, but 15 seconds isn’t enough time for a big decision, so he was way out of line. After the hand, all the other players agreed with me that the clock had been called too soon. In fact, several of them berated the floor supervisor for even beginning the countdown after such a short time.

Then the discussion turned to the need for a shot clock in poker, similar to the NBA and NFL. You’d get thirty seconds to act, but if you don’t do something more than stare at your opponent by the time it ticks down to zero, your hand is dead. I understand that this could lead to players who normally act fast taking longer than usual just because they can, but I don’t think the privilege would be abused for long. And I can see where, in bigger cash games or tournaments, players could be given two or three time-extension cards for use when they have a genuinely difficult decision.

But for the routine plays, or for the plurality of times when you’re just going to fold, we need something to speed up the pace of poker, for the sake of television viewers — and my sore butt.