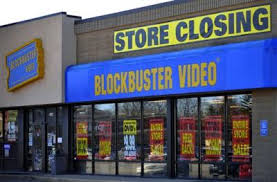 When it was announced last week that Blockbuster Video was closing its remaining 300 stores, I was surprised. Not that the business had gone so far south, but that it was still around. The local franchisee here had shuttered his locations several years ago, and I don’t think I’d been in one for over a decade.

I was an early adopter of DVRs and digital downloads and Netflix, with its searchable database and huge collection, so I had little use for Blockbuster anymore. But in the 80s and 90s, when I was a customer, the thing I found most annoying wasn’t the late fees or the staff’s lack of movie knowledge or the constant reminders to rewind the VHS tapes after viewing.

It was the company’s definition of “new.” Once you walked in the door, you were surrounded by three walls full of videos with giant signs that said New Releases. The implication was that all of those videos had been added recently, but one quick glance proved that “new” and “recent” were much more relative terms in the Blockbuster dictionary.

To me, “new” means a movie that’s just come out on video. I understand that it’s impractical to only keep titles on that shelf for a week until another batch of new releases comes in, so I’d understand if “new” meant “in the last couple of months.” But Blockbuster stretched “new” to mean “in the last few years.” When truly new (just released) titles came in, there were simply added to the smorgasbord, hidden among the older material. Unless you knew exactly what you were looking for, because you’d read about it in Entertainment Weekly or heard about it from a friend, you were forced to graze through the entire collection until something caught your eye that you hadn’t seen before.

Blockbuster was also the first evidence I had of the enormous number of movies that are made that no one’s ever heard of. I don’t mean obscure indie movies, I mean truly bad ones that were nothing more than an enormous waste of time and money. I don’t see every movie that comes out, but because I’ve always talked about them on my radio show, I’m usually aware of what’s come the pike — or at least I thought so, until I scanned the shelves at Blockbuster.

Once, in the early 1990s, I tried an experiment. The idea was to start with the first shelf of the alphabetical listing of New Releases, and see how far I got before I spotted a title I had never heard of. It wasn’t long before I came upon “Alligator 2: The Mutation.” The title implied that there must have been a first “Alligator” movie, but I’d never heard of it, either, and this was in the days long before I could whip out my iPhone and check IMDb for details.

I pulled “Alligator 2” off the shelf, looked at the ridiculous cover art, then flipped it over to discover who was responsible for what I was sure was a piece of crap, and was surprised that it starred a couple of actors I’d heard of — Joe Bologna (hilarious as King Kaiser in “My Favorite Year”) and Dee Wallace (the mom in “ET: The Extra-Terrestrial”) — and came out in 1991. You can guess the plot, in which a giant alligator gets into the sewage system and terrorizes a town. There was no way I was going to rent this bomb, so I returned the box to the shelf.

And that’s when I saw it. Right there, in the next slot: “Alligator.” The original movie. Which the box said had been made in 1980. I was probably the only person who had ever lifted it off that shelf since it had been put there.

But in the Blockbuster universe, it was still a New Release.