A Cup Of Crap 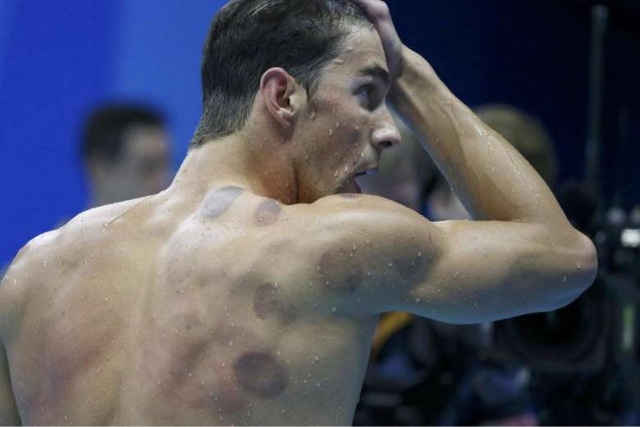 After US swimmer Michael Phelps showed up at the Olympics with round purple bruises on his body, there have been a ton of stories explaining why. The short answer: he’s fallen for pseudoscientific bullshit.

It’s called cupping, a technique that dates from before modern medicine in which a glass cup is heated and placed on the skin. As the air inside the cup cools, it creates suction, pulling up the skin, often breaking capillaries underneath, and leaving that round purple/red mark. Believers say it helps fight muscle fatigue and, well, a litany of other things, but there is absolutely no scientific evidence to support those claims.

I’ve known about cupping for a long time, because my parents told me stories of their parents using the practice to heal them (and their siblings) when they were very young. What did it treat? Whatever you said it treated — a cold, a fever, pneumonia — you didn’t have to be specific because the fact was (and remains) that cupping has no positive or restorative effect at all.

Of course, health expert Gwyneth Paltrow — the woman who promoted vagina steaming — is a cupping endorser, so you know it’s garbage. Unfortunately, because of Phelps, the gullible public, which had never heard of cupping, will start using the practice. I predict that within a month or two, we’ll see a rash (if you’ll pardon the pun) of stories about people being burned by the practice, both literally and figuratively.

What really pisses me off about this story is that the vast majority of media outlets that report on Phelps’ bruises won’t bother to find someone who says what I’ve just told you. All they had to do was Google “cupping” to find this piece, in which David Gorski debunks the nonsense behind the craze.

I’d much rather they tell a better science-for-the-win story like this one, about a woman who got married this weekend and was accompanied down the aisle by the man who had received her father’s heart after he died ten years ago. That’s a tale of real life-saving science with a happily emotional ending.

A story like that could inspire more people to become organ donors, which we have a chronic shortage of in this country. But instead we’ll get a batch of trendy idiots walking around with giant hickeys on their bodies.