A Movie Waiting To Happen 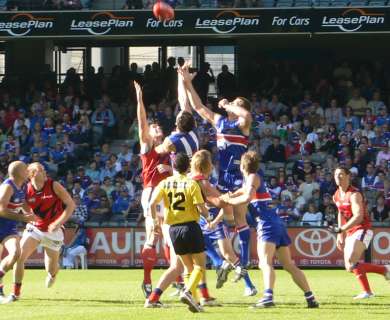 Somewhere in Hollywood, there must be a screenwriter preparing a pitch based on a story in today’s NY Times about NCAA basketball players being recruited to play Australian Rules Football down under. It would be a classic fish-out-of-water story, similar to Disney’s “Million Dollar Arm,” which starred Jon Hamm as a sports agent trying to find a cricket bowler in India who could become a major league pitcher here, thus expanding baseball’s popularity to the sub-continent.

According to the NYT story, Australia has a dearth of men over six-and-a-half-feet tall, while the NCAA has plenty of them, so recruiters come to the US to audition potential players, whose height advantage would serve them well as “ruckmen” in Aussie Rules Football.

The guys who play that form of football may be the best athletes in the world. I was introduced to the sport when I befriended a guy from Sydney who was living in the US for a few years. At the time, ESPN would show some Aussie Rules games, including the Grand Final, their version of our Super Bowl. Russell had played semi-pro football at home and explained the intricacies of the sport to me. Then, when my wife and I went to visit him in Sydney a few years later, he took us to a game and I was amazed at how the players wore no padding — despite lots of bone-crushing tackling and blocking — and they were in constant motion over a field larger than our football fields. He told me that a starter could be on the field for 90% of the game, during which he would run anywhere from eight to ten miles.

Converting college basketball players into ruckmen sounds like the basis for an easy movie plot. Get a couple of tall young unknowns as the leads, hire Russell Crowe as the coach, add in a female love interest or two, have them learn real Aussie slang and food, and you’re off.