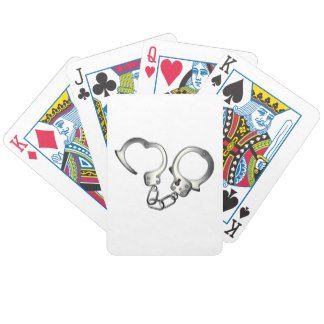 Last week, at a poker tournament in Niagara Falls, Ontario, one of the players was arrested at the final table. The Globe and Mail has the details — which do not include cheating or any other charges related to that tournament.

At the time of his arrest, he was the chip leader with five players remaining. Although he was taken out of the room in handcuffs, he was still considered an active player, so his chip stack wasn’t removed. Rather, it dwindled slowly as antes and blinds were taken when play continued. Still, he had enough chips to outlast the two short-stacks. By that point, the two remaining players had more chips than the arrested guy, so they made a deal to split the prize money for first and second place (about $150,000 each), while the guy who wasn’t there won the third-place prize of $80,000.

The tale reminded me of a tournament I played several years ago at the Hollywood Casino in Lawrenceburg, Indiana (just outside Cincinnati). The event, which drew hundreds of entrants, began on a Saturday, and I did well enough to make it to day two, along with a few dozen others. We were down to two tables with 13 players when one of them called over a supervisor to explain that he had to leave to attend his daughter’s birthday party. He asked what his options were, and the supervisor explained that he could move all-in on a hand, lose, and be paid the 13th-place money. Or, as in the Niagara Falls tournament, he could leave but his non-insubstantial stack of chips would remain until he was blinded off.

The guy clearly wanted to stay and play, but he did the right thing and went home to his daughter’s party. You wouldn’t be wrong to ask, as I did, why he’d enter a two-day tournament knowing it might conflict with his parental obligation. Who knows? I didn’t care at that point. I just didn’t want to be eliminated before he was.

Once he left, the supervisor announced to the remaining dozen that there could not be any deals made while the absent player still had chips, because he couldn’t be party to the deal-making. That was fine with everyone, since it’s rare that a dozen players would engineer a chop (I’ve only had it happen once, but that’s another story for another day). Thus, play resumed, and when three more players were eliminated, the remaining ten (including me and the absent Dad) were moved to the final table.

At this point, play slowed considerably, as no one wanted to be eliminated before a guy who wasn’t there, and his stack was getting so small that he’d only last another round or so before the antes and blinds took his last chips. Before that happened, however, the other small stack moved all-in with a pair of queens and was called by a bigger stack with ace-king. When an ace came on the board, we had our tenth-place finisher.

A few hands later, absentee Dad’s last chips were pushed into the middle and he was eliminated in ninth place, which meant he’d earned a couple of hundred dollars more than he would have if he’d stuck around and finished in 13th place. The next guy eliminated was….me. I have no particular memory of the hand, other than the fact that I was short-stacked, too, and had very few options at that point.

I wished the remaining players good luck and went to collect my 8th-place prize money. I wasn’t thrilled at being knocked out after playing for more than 18 hours, but at least I hadn’t lost to a guy who wasn’t there.

And at least he didn’t have to explain to his daughter why he’d gotten a pair of handcuffs for her birthday.