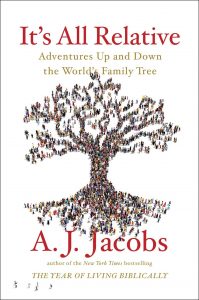 When AJ Jacobs starts a project, he doesn’t look for something simple to write about.

He read the entire Encyclopedia Brittanica (remember when that was a thing?) for his 2004 book “The Know-It-All.” He spent a year following all the rules in the Bible for his 2007 book, “The Year of Living Biblically.” He tried to become the healthiest man alive in his 2012 book, “Drop Dead Healthy.” In 2014, he became obsessed with his family tree, at one point putting together the world’s largest family reunion.

Now he’s taken that to the next level, with a book called “It’s All Relative: Adventures Up and Down the World’s Family Tree,” and returned to my radio show to talk about it. Among the topics we covered: