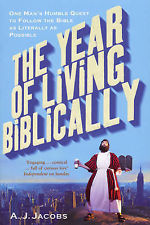 AJ Jacobs returned to my show today to talk about his latest live-it-and-write-about-it experiment. He spent a year trying to follow all the rules of The Bible, more than 700 in all, and kept track of his adventures, which he recaps in “The Year of Living Biblically.”

The rules included the Ten Commandments, of course, but also some less-known guidelines, like the ban on mixed fibers that made him throw out all his poly-cotton clothes. We talked about how hard it was to avoid coveting, the challenge he faced in avoiding lust while interviewing Rosario Dawson, and the time he actually stoned an adulterer.

Jacobs really got into the project, allowing his beard to grow unshorn and, for a few months, walking around in a white robe and sandals. You don’t have to imagine how that went over with the TSA screeners at the airport, because I asked him. We also discussed how his wife reacted to all of this, including the hut he built in their living room. That didn’t stop him from going forth and multiplying, as he and his wife begat twins.