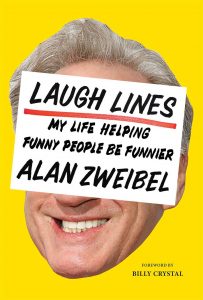 They have a new thing now called sperm banks. It’s like an ordinary bank except here, after you make a deposit, you lose interest.

Alan Zweibel wrote that joke in 1972 for a comedian performing in the nightclub of Kutscher’s, a hotel in the Catskills. At the time, Zweibel’s full-time job was slicing meat in a delicatessen. But on the side, he created material for a series of Borscht Belt comics named Morty, Mickey, Freddie, and the like, who paid him seven bucks for each joke.

Eventually, he moved on to much bigger and better things. In “Laugh Lines,” he looks back at his career as one of the original writers on “Saturday Night Live,” where he wrote reams of material for “Weekend Update,” John Belushi’s Samurai sketches, and others. It’s also where Zweibel met Gilda Radner behind a potted plant, beginning a friendship that continued even past her death, when he wrote the book (and play) “Bunny Bunny” about their decades-long platonic relationship.

The book also includes stories about how Zweibel literally put words in the mouths of other talented performers. He co-created and executive produced “It’s Garry Shandling’s Show,” helped Billy Crystal craft his Tony-winning one-man show “700 Sundays,” then did the same for “Martin Short: Fame Becomes Me.”

Along with his successes, Zweibel doesn’t shy away from discussing the bumps in his career. There were his failed attempts at standup. There was his effort to squeeze anything funny out of a sitcom that starred the completely humorless Farrah Fawcett and Ryan O’Neal. There was the not-so-well-received movie version of one of his books, “North,” which earned a remarkably scathing review from Roger Ebert in which the word “hated” appeared ten times in just one paragraph.

My reaction to “Laugh Lines” was exactly the opposite. I loved it. Laughed out loud several times. Forced Martha to listen to me read excerpts to her out loud, giggling so much I barely got all the words out. Finally, she told me to just finish the book, then hand it over so she could enjoy the whole thing, too. Which she is currently doing.

As I absorbed “Laugh Lines,” I heard Zweibel’s voice in my head, because I have had the pleasure of talking with him several times on my radio show (see links below). During those conversations, he related some of the stories that show up in “Laugh Lines,” including one about his second appearance on David Letterman’s TV show.

It was July 13, 2007, and Zweibel was there to promote his novel, “The Other Shulman.” After a few minutes of banter from the guest chair in his first segment and a commercial break, Zweibel did something I’ve never seen another author allowed to do on a talk show. He stood center stage, with a copy of his book on a music stand, and read a section of it out loud. This may have occurred with more obscure authors on “Book Notes” on C-SPAN, but it seemed unprecedented on a popular network late night show. It was also extremely funny, not only because Zweibel is such a good writer, but because he has an inherent sense of comedic timing and delivered the material perfectly.

In “Laugh Lines,” Zweibel writes about that appearance:

Everyone was happy. In particular, my publisher, who was ecstatic as the book climbed from something like 195,000 on Amazon’s ranking to 57 after the show aired (and then within a few short days, it plummeted to its former depths). The next day I got a very funny e-mail from Paul Simon telling me how sales of “The Boxer” had soared because of my reading. To which I wrote back, “Paul, the fact that the studio audience sang along when I recited your lyrics is testimony to the enduring effect your poetry has had on our culture. That said, can I trouble you to write another song that I can plagiarize the next time I’m a guest on the Letterman show? Thank you in advance.”

“Laugh Lines: My Life Helping Funny People Be Funnier” is a wonderful compilation of the stories behind the comedy Alan Zweibel has created to entertain us for more than four decades. I strongly recommend it.