All In With John McCain 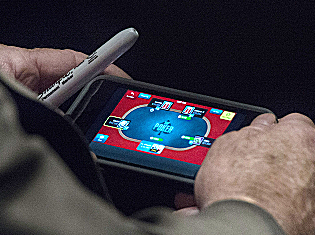 I’m not bothered by the photo of Senator John McCain playing poker on his iPhone during yesterday’s Senate Foreign Relations Committee hearing about Syria. I’ve never been to a hearing on Capitol Hill, but I’m sure they drag on and on.

Still, this wasn’t a discussion of how much money to spend on sending wheat to the sub-continent or whether to support a resolution regarding mining in South Africa. This was a hearing to determine whether Congress should support President Obama’s desire to go to war with Syria.

War. That’s John McCain’s favorite subject. If you want to be trampled, stand between McCain and a live television camera when the topic of discussion is getting the US involved in some conflict or other. After all, he knows from experience that there’s no downside to war.  Oh, wait.

I’m sure my friends who played online poker are blogging about how, if McCain likes playing on his iPhone so much, he should support the legalization of online poker at the federal level. Not because he’s in smack in the target demographic for the online sites. No, because they were all sure that after Black Friday, it wouldn’t be long before PokerStars, Party Poker, Full Tilt, etc. were back on their screens with a regulatory and taxing system that would make the US once again the world’s biggest market for the game. But I don’t recall McCain or many other senators supporting such a move, and it’s certainly way down their priority list now. I don’t follow the industry as closely as I did when I hosted The Final Table Radio Show (2009-2012), but there doesn’t seem to be much buzz on the idea outside of Nevada.

What those online poker enthusiasts missed in the McCain photo is that he could just as easily have been playing Candy Crush Saga or Farmville 2 or some other game to help pass the time before his next TV appearance. Of course, there’s nothing that could have been said in the committee hearing that would have changed McCain’s hawkish views, because when it comes to war — to put it in poker terms — he’s always all-in.