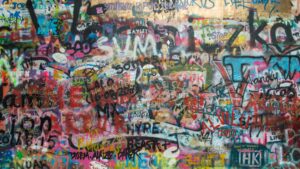 In my travels over the past year, I’ve been to several cities that have an abundance of graffiti on nearly every available vertical surface. The authorities either ignore it or are powerless to do anything about it. Urban areas in particular have so many other issues to solve that spray paint vandalism is low on their priority list.

But here is something that surprised me when I did a little bit of research: it turns out the overwhelming majority of graffiti (over 90%) is not gang-related. A report by the city of Columbus, Ohio, says most graffiti is done by people in their teens and early twenties from every ethnic and income background in the community they live in, but rarely by gang members.

I recently saw some graffiti on the back of a sign high above an always-busy highway. It was the name Joann intricately spray-painted in multiple colors, an undoubtedly laborious effort that somehow eluded detection by anyone in law enforcement, despite hundreds of drivers passing below who must have seen the culprit in action.

I almost wanted to give the tagger credit for climbing way up there and holding on while creating the end result. And I wondered whether they’d done it in daylight or the dark of night, with a partner holding a flashlight so they could see what they were doing.

Because you wouldn’t want to climb down and discover you misspelled your girlfriend’s name.