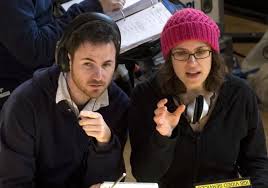 Here’s my conversation with Ryan Fleck and Anna Boden, writer/directors of “Mississippi Grind,” the gamblers-on-the-road movie that I appear in, along with stars Ryan Reynolds, Ben Mendelsohn, and Sienna Miller. We talked about:

“Mississippi Grind” is a wonderfully-told road movie of two guys making their way from Iowa to New Orleans for a high-stakes home game, and stopping along the way in St. Louis and Memphis for some poker, dog racing, horse racing, blackjack, craps, and — of course, women. As a poker player, I can tell you they got those scenes right, and captured the feel of the cities and the gambling atmosphere perfectly.

It opened in St. Louis this weekend, then rolls out in other cities over the next month. It will be available on DVD on December 1st. Don’t let the fact that I’m in it keep you away.

Note: we had an audio problem in the studio on the day this was recorded, so the quality is not up to the standards of previous podcasts. Nonetheless, I wanted to share it with you and hope you still enjoy it.