My wife and I were in Vegas this weekend, but not for the World Series Of Poker Main Event. We attended the 9th annual Amazing Meeting, put on by the James Randi Educational Foundation.

TAM is a gathering of skeptics, scientists, and magicians, and has become the largest gathering of its kind in the world. When I attended TAM 2, we had a couple of hundred people. This year, TAM 9 was a sellout — attendance topped 1,600. I was stunned to look around the ballroom at the Southpoint and see such a large crowd, and happy to see that 40% of them were women, a marked improvement over the 90-10% ratio of just a few years ago. Half of the attendees were experiencing their first TAM, and I could see in their faces that same feeling I had 8 years ago — the joy in being surrounded by other people who believe in critical thinking over pseudoscience, fighting against not just paranormal claims, but harmful idiocy like homeopathy. It’s the kind of group where the men are more likely than not to have facial hair (so I fit right in).

While evenings were filled with entertainment from Penn Jillette

, and mentalist Max Maven, the core of the four-day Amazing Meeting is the middle two days, which are filled with speakers. Among those who took to the lectern were major crowd-pleasers Bill Nye

(who previewed the children’s book he’ll publish this fall), and Richard Wiseman

” is now available in the US for Kindle). In addition to the large number of women in the audience, we had more female presenters than ever before, including astronomer Pamela Gay (who gave one of the most passionate pro-science-education speeches I’ve ever heard), psychologist Carol Tavris

(with a very compelling explanation of false memories, the unreliability of eyewitness testimony, and a debunking of regressive therapy). 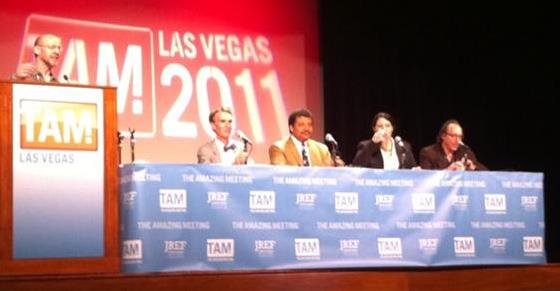 One of the highlights was a panel with Tyson, Gay, Nye, and Lawrence Krauss

debating the future of space exploration, moderated by Phil Plait. The panelists had so much to argue about that, at breakfast the next morning, Phil told me he felt guilty for not saying more to steer the conversation. I told him that he should feel the way I do when my interview subjects are so entertaining that I hardly speak — be happy with the outcome and take credit when people say how great it was!

In his keynote address on Friday afternoon, Tyson attacked scientific illiteracy in the American public and media, mounting an argument for more and better science education: “We are not part of the universe, the universe is part of us.” He also decried the reduction in funding for NASA, pointing out that, from Columbus’ New World voyage to Neil Armstrong’s giant leap for mankind, exploring frontiers has only been accomplished when subsidized by governments — adding that more money was spent on the bailout of the “too big to fail” banks than on the entire fifty-year history of NASA.

Of course, many of the attendees wanted to see and hear James Randi, and he didn’t disappoint, whether it was at the opening reception or in the hallways or onstage. Now into his eighties, he’s smaller and a bit more feeble than he was when I first met him a quarter-century ago, but he still had enough stamina to stay at Penn’s bacon-and-donuts-and-rock-and-roll party long after I’d gone to bed, only to return to start the festivities again early the next morning. I’m so proud to call him not only a hero, but a friend.

One session featured Randi being interviewed by Jamy Ian Swiss in a retrospective of Project Alpha, a 1979 project in which he conspired with young magicians Steve Shaw (now known professionally as Banachek) and Mike Edwards to undermine a parapsychology experiment conducted at Washington University by physicist Peter Phillips. Phillips’ experiments were funded by McDonnell-Douglas chairman James McDonnell, who believed in all sorts of psychic nonsense. When Randi heard about them, he offered his expertise as an expert in deception, sending several letters warning Phillips of fraudulent practices to watch for when testing people who claimed to have paranormal abilities. Phillips rejected Randi’s entreaties, so Randi had Shaw and Edwards pose as psychics with telekinetic abilities. With his guidance and their talents as magicians, the two guys were able to fool Phillips and his researchers for nearly three years. When it was over, Randi, Shaw, and Edwards made their hoax public for the first time, sending shock waves through the world of parapsychology and proving that, while scientists are very good at science, they’re terrible at illusion.

Project Alpha is a story too long to recount in full here, but deserves to be told in a full-length book because it’s such a great story. In the meantime, this Wikipedia summary will give you a pretty good idea of what Randi, Shaw, and Edwards pulled off.

There’s one last moment from TAM 9 that I have to share with you. During the Q&A session after a panel on science-based-medicine and placebos, an audience member from Spain (who sounded just like Mandy Patinkin in “The Princess Bride

“) asked a question and the panelists responded. That’s when emcee George Hrab paused, turned to the questioner and asked, “This is just for me. Would you please say ‘Prepare to die’?” The guy from Spain said it and got a big laugh, although I’m not sure he understood the reference. I check his name badge, which did not say he was Inigo Montoya.