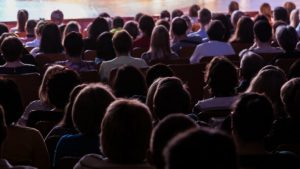 At a movie screening I attended this week (my review will post tomorrow), there was a group of people from two co-owned local radio stations making a joint promotional appearance. That consisted of a DJ playing music through his own sound system, some signs near the theater entrance, and several of the on-air personalities getting up in front of the crowd to give away t-shirts.

I had a lot of experience doing events like this. The right way to do it involves engaging the audience in a bit of fun for a few minutes (five, ten tops), promoting yourself and your station, and giving some stuff away before the lights go down and the movie begins. The people in the theater are mostly contest winners who got tickets from the station, so you’re working in front of a friendly crowd, and you have a chance to make some personal contact that may encourage them to listen longer and/or more often. Also, if you do it well, you might convince any non-listeners in the auditorium to check out your station or show.

Last night, one of the jocks played host and introduced some of her colleagues, mentioning when they were on the air and which of the two stations they were on. Then she started asking questions, beginning with, “What is the name of the afternoon DJ” on her station? If this were a loyal listener crowd, hands should have shot up around the room. Nope. No one knew. There was an awkward pause before she asked again. Finally, someone on the side shouted the correct answer and was awarded a t-shirt.

Professional radio people always believe themselves to be more famous than they actually are. Still, in a room supposedly full of listeners, that was a pretty disappointing response. Remember, she had provided this information about thirty seconds earlier.

But the woman playing host didn’t read the room. Instead, she asked another question: who can name the nighttime DJ on our sister station? Crickets. She asked again. Not a single hand went in the air. She cajoled, “Come on, now. I’ll give you a hint,” as she mentioned the person’s first name. Still nothing. At that point, another person on the side of the room — I suspect a fellow employee of the radio station — said the name and was also given a t-shirt.

Okay, two tries, two fails. Time to switch tactics. Now she asked, “Who’s the star of the movie we’re about to see?” This time, dozens of arms were raised and the question easily answered.

This should have been a signal to her that, at a movie screening, your best bet is to ask questions about movies. Not only does it increase the likelihood of getting answers, but it also engrosses the people in the room who aren’t going to raise their hands, yet still play along mentally.

It’s the same as on-air giveaways. Don’t just ask for the 23rd caller, make the giveaway entertaining even for those who will participate passively.

Unfortunately, the host did not pick up on this blatant signal. Apparently, all those hands in the air for the third question encouraged her, so she went back to asking about the other DJs — many of whom were sitting right there. Imagine their embarrassment when no one knew their names, either.

This kind of presentation reeks of a lack of preparation. All these five DJs had to do was come up with two trivia questions apiece (e.g. about previous movies the cast and well-known director had made) and the whole name-the-DJ disaster could have been avoided.

This was the second blown promotion opportunity I’ve seen at a movie screening this year. Two months ago, before “Top Gun: Maverick” was shown, DJs from two other (also co-owned) radio stations got up in front of the crowd. That time, they tried to entice audience members to try some wacky stunts. During one of them, the host pointed out that the station’s promotion director was capturing everything on video on his phone so the event would go viral.

I cringed at the use of that word. You can’t plan for things to go viral, because you can’t predict what will suddenly become so popular that everyone online wants to share it with everyone else. The most you can do is shoot it, post it, and hope it turns into a meme.

In this instance, what we were watching didn’t even go viral in the room. Instead, the audience was bored and inattentive — two words you do not want describing anything you do in front of an auditorium full of people.

On the same night, the host introduced her on-air colleagues, including one guy who’s on from 10am to 3pm, then on the sister station from 3pm to 7pm. Upon hearing that, a woman sitting next to me gasped, did some quick arithmetic, and said, “He works nine hours straight?”

I didn’t say anything, but I wanted to tell her that it’s more likely he only works a couple of hours a day on the air because he voice-tracks both shows. That means he goes into the studio in the morning and records all of the things he’s going to say that day, putting each of them separately into a computer which then inserts his segments between the songs and sponsors later.

Done right, the audience should have no idea he’s not behind the microphone when they’re listening. He might be on the street as a salesman for the station. Or maybe after recording his show-bits he doubles as the Production Director, making commercials and promos for the company’s entire cluster of stations.

He may also have to record his shows for the weekend — because voice-tracking allows stations to have the same personnel on the air in the same time slots seven days a week. That’s why it’s not uncommon for a radio station cluster to have zero human beings in the building on Saturdays and Sundays.

Doing such robotic radio might save money for the corporation that owns your radio station, but it kills the possibility of creating relationships with listeners. So does doing a bad job with an in-person promotional appearance.

Which is why no one at the movie screening knows your name.