Another Movie You May Not Know 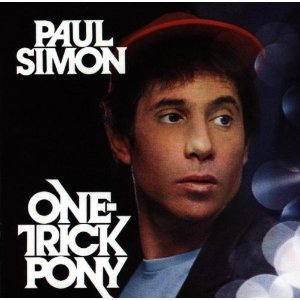 I have praised Paul Simon’s “One Trick Pony” before but hadn’t added it to my Movies You Might Not Know list because it wasn’t available on DVD. That’s changes today, as Warner Brothers has finally released it as part of their Archive Collection.

“One Trick Pony” is the story of Jonah Levin, a singer/songwriter who became a star in the 1960’s by writing a folk song that became an anti-war anthem. But now it’s 1980, and Jonah’s still on the road, scratching out a living touring from town to town in a van with his four-man band (a helluva group, made up of Richard Tee, Tony Levin, Steve Gadd, and Eric Gale), while back home he has a small son and a wife (Blair Brown) who wants a divorce. All of the musical performances are great (the soundtrack includes “Late In The Evening,” which became a hit) as is a scene in the van where the guys play a game naming dead rock stars, eventually grouping them by how they died — plane crash, overdose, etc.

As he’s struggling to keep his marriage together and work the road doing small club gigs, he’s also trying to get a record company to give him a deal for an album. That’s where he meets Rip Torn as an executive who might give him a chance, Allen Garfield as a Kal Rudman-type radio trade publisher who is legendary for being able to “hear a hit,” and Lou Reed (in an ironic casting move) as a producer who takes one of Jonah’s best raw songs and turns it into mush. But first, Jonah must endure the humiliation of auditioning new material for them in Torn’s office, without his band…

Simon, who wrote the script and the songs, plays Jonah with equal parts talent, wit, and sadness. It’s a shame the movie didn’t do better at the box office, and that Simon never wrote another one. “One Trick Pony” is not about a loser, nor a man of destiny, nor a musician fighting his demons (a la Jeff Bridges in “Crazy Heart” or Robert Duvall in “Tender Mercies”). Jonah Levin is a guy fighting to reclaim his place in an industry that has shunted him aside, while keeping his integrity intact.