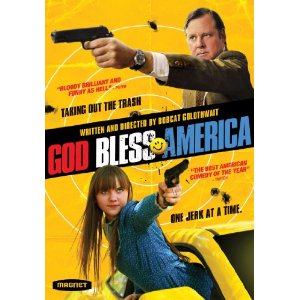 It’s not nice to laugh at someone who’s not all there. It’s the same type of freak show distraction that comes along every time a mighty empire starts collapsing. “American Superstars” is the new Colosseum, and I won’t participate in watching a show where the weak are torn apart every week for our entertainment. I’m done, really. Everything is so cruel now. I just want it all to stop.

Those are the words of Frank, the protagonist in “God Bless America,” a satire for everyone who’s ever witnessed someone being incredibly mean or inconsiderate to another person and wanted to teach them a lesson.

Frank has had it with idiots and jerks in his daily life, and when he turns on his TV, all he sees are reality show misfits, cable TV bullies, and judges on an “American Superstar” (think “American Idol”) making fun of a mentally challenged contestant (think William Hong).  Because he’s had a very bad day — his young daughter refuses to come see him, his boss fired him for petty reasons, and his doctor just told him he has an inoperable brain tumor — Frank puts a gun in his mouth and decides to end it all.  But before he pulls the trigger, he sees a reality show about a 16-year-old ultra-rich brat and decides she has to die first.  The crime is witnessed by another teenage girl who, rather than being horrified, is excited by the idea of taking out the world’s most irritating people.  She befriends Frank and the two begin a killing spree that’s half “Badlands” and half “I’m mad as hell and I’m not gonna take it anymore.”

It the civilized world, this would be psychopathic behavior, and we already have too many crazy people killing randomly because of fear, bigotry, and political or religious beefs.  But in “God Bless America,” written and directed by Bobcat Goldthwait, it works.  You might even find yourself sympathizing with Frank (played by Joel Murray in a perfectly low-key style) and his young cohort Roxy (played by Tara Lynne Barr, in what would be a breakout performance — if anyone had seen this movie) as they thin the herd, rant about their cause, and try to decide who their next victims should be.

I don’t recall “God Bless America” making it to movie theaters, but it’s on DVD now, which is why I’m adding it to my Movies You Might Not Know list.