Another View of American History 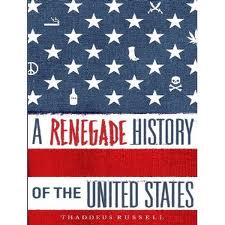 As America prepares to celebrate its 235th birthday, I thought this would be a good time to hear a different view of our nation’s history.

This morning on KTRS/St. Louis, I talked with Thaddeus Russell, author of “A Renegade History of the United States,” which is now out in paperback. Russell says that, despite its puritan roots, the only way America could exist as the home of freedom is through the contributions of those at the lowest order of society. He says prostitutes pioneered many of the freedoms that women now take for granted, that organized crime was responsible for legal alcohol and gay rights, and violent protestors were as much a part of gaining civil rights for blacks as Dr. King’s non-violence.

We spent quite a bit of time on who should get credit for bringing down the Soviet Union, a topic I’ve touched on before — we agree that it was cultural forces like jazz musicians, rock and rollers, and CNN founder Ted Turner who played a bigger part in ripping away the Iron Curtain than any politician or the US military.

It’s a fascinating read, and a fun conversation. Listen, then click here to subscribe to these podcasts via iTunes!

In this interview, I asked Russell how the college students he taught and the administrators he worked for reacted to his view of American history. He said that, despite increasing attendance in his classes, they led to his getting fired by Barnard College, an event he chronicled in this Huffington Post entry.