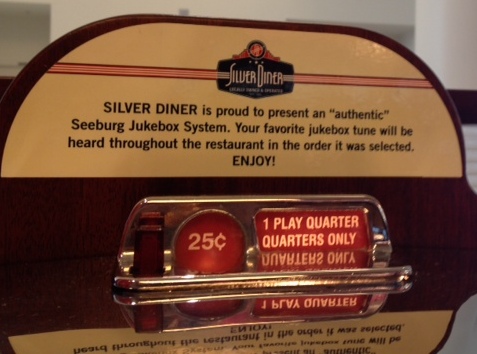 I love diners, especially the ones that are open 24 hours, where you can take a bunch of people for a meal and find something for everyone, from burgers and fries and shakes to a hot open turkey sandwich with cranberry sauce to huge salads to pancakes and eggs all day. Today’s diners even offer healthier menu choices — the Silver Diner has a page dedicated to “Flexitarian” items.

But even with the more modern attempts to appeal to consumers, many of them are stuck in the past when it comes to motif. As I traveled this summer, I encountered several diners with throwback interior design from the 1950s and 1960s even though they were all relatively new, built in the last decade or so. They even do it in a restaurant chain called “Cheeburger Cheeburger” (which is unrelated to the Billy Goat Tavern in Chicago, the inspiration for the classic “SNL” Olympia Cafe skit with Belushi, Aykroyd, and Murray).

The whole notion of these coin-operated jukeboxes is terribly anachronistic in 2014. They belong to an era when your music collection wasn’t portable, before on-demand audio became as easy to access as reaching into your pocket — without having to drop a quarter in. In this era of instant personal musical access, who wants to listen to other people’s selections through tinny speakers until your song comes around?

By the way, if the Silver Diner’s jukebox really was authentic, it would have all of its music coming off vinyl 45rpm records, rather than the digital delivery system it is built on.