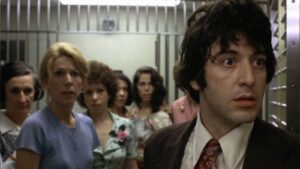 #1) “Dog Day Afternoon.” Based on a real bank robbery on a steaming hot day in Brooklyn in the 1970s, Sidney Lumet’s film sizzles thanks to Al Pacino’s lead performance as Sonny, a man who’s both desperate and surprisingly human. John Casale plays his partner in crime, Sal, as world-weary and not too bright, but intense. He holds the interior of the bank together while Sonny plays with the cops outside and turns the whole thing into a sideshow, complete with a crowd of New Yorkers cheering him on. The supporting cast is note-perfect, including Charles Durning as an NYPD detective trying to de-escalate the proceedings, Sully Boyar as the bank manager who wants to end the standoff peacefully, Chris Sarandon as Sonny’s boyfriend, James Broderick (Matthew’s father) as a no-nonsense FBI guy, and Lance Henriksen in a small but important role towards the end. My favorite characters are the bank tellers (including Carol Kane, Marcia Jean Kurtz, and Penelope Allen), who form a fascinating bond with the thieves. Somehow, Lumet manages to make Sonny and Sal sympathetic while giving Pacino enough space to turn in one of his greatest performances. 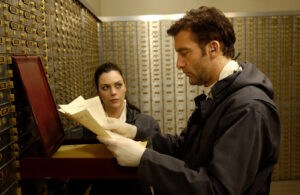 #2) “Inside Man.” Too often overlooked amidst Spike Lee’s filmography, this is a masterclass in filmmaking. Clive Owen and a group of thieves take over a downtown New York bank with a well-thought-out plan and mysterious motives. Denzel Washington and Chiwetel Ejiofor are the detectives tasked with figuring out what’s going on while keeping the hostages inside safe. Meanwhile, bank owner Christopher Plummer engages the services of Jodie Foster, a well-connected fixer, to ensure that a decades-old secret isn’t revealed. Willem Dafoe plays the head of the SWAT team that’s just dying to take action. Along the way, there are unforeseen twists and turns in the really clever script by Russell Gewirtz. Like Lumet, Lee manages to tell a gripping story without car chases or special effects — just a bunch of smart people trying to figure out what the other smart people are doing. If I come across “Inside Man” on TV by accident, I almost always end up watching to the very end. 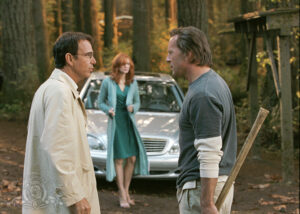 #3) “Bandits.” In the first scene, Bruce Willis commandeers a concrete truck as his getaway vehicle during a prison escape, and his best friend, Billy Bob Thornton, jumps aboard. The two make an interesting pair of opposites — an impulsive Willis and the always-worried Thornton — who come up with a new bank-robbing strategy in which they kidnap a bank’s manager the night before. Along the way, they meet Cate Blanchett as a woman fed up with her marriage and looking for some excitement, and wow, does she find it with these two. With her hair dyed a fiery red, Blanchett makes every scene she’s in better, developing a crackling chemistry with both leads. The whole thing is framed by director Barry Levinson as an episode of a show similar to “America’s Most Wanted,” with Bobby Slayton as the John Walsh-like host. To my knowledge, “Bandits” is the only movie in which bank robbers use a yellow highlighter to disarm a security guard. 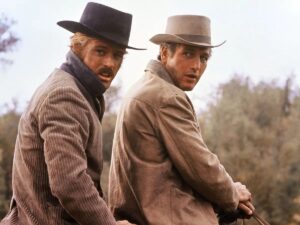 #4) “Butch Cassidy and the Sundance Kid.” Yes, it’s the robbery of a train that gets our heroes (Paul Newman and Robert Redford) followed by a posse of Pinkertons, but there are plenty of banks held up by their Hole In The Wall Gang, too. Once they’re chased out of the US, Butch and Sundance go to South America, and it’s a good thing Katharine Ross goes along to teach them the key bank-robbing words in Spanish. Sure, the whole bike-riding sequence (to the tune of BJ Thomas singing “Raindrops Keep Falling On My Head”) adds nothing to the plot and could have been excised, but that doesn’t detract enough from William Goldman’s Oscar-winning script and George Roy Hill’s Oscar-nominated direction. Plus, you get Newman insisting on going over the rules before getting into the shortest knife fight in cinematic history with Ted Cassidy. 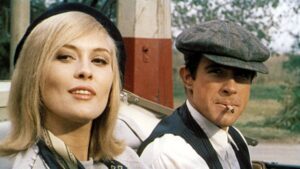 #5) “Bonnie and Clyde.” In the hands of director Arthur Penn and stars Faye Dunaway and Warren Beatty (who also produced), this tale of two depression-era bank robbers who became folk heroes changed Hollywood moviemaking for the better. It laid the groundwork for every other title on this list, and made for grand entertainment on its own. Its two leads were at the top of their game, ably supported by Gene Hackman, Estelle Parsons, Michael J. Pollard, Denver Pyle, Dub Taylor, and Gene Wilder in his big-screen debut. The violence in “Bonnie and Clyde” was shocking for 1967, but seems almost tame today. The script by David Newman, Robert Benton, and Robert Towne hits on all cylinders and there’s not a wasted moment. 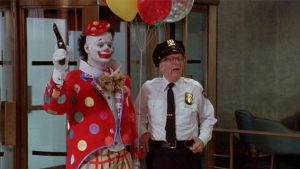 #6) “Quick Change.” It’s not enough to have Bill Murray dressed as a sad clown robbing a bank at the end of the day. After he gets out with the money, he still has to get away, and that’s not as easy as it seems. He and his co-conspirators (Geena Davis and Randy Quaid) can’t seem to find a route to leave New York City, despite their best efforts. Meanwhile, Murray plays phone games with a frustrated police captain (Jason Robards) on their tail. If you blink, you might miss the small parts played by Bob Elliott, Phil Hartman, Reg E. Cathey, Jamey Sheridan, and Tony Shalhoub — not to mention Philip Bosco as the most by-the-book bus driver ever. But the movie belongs to Murray, who co-directed with writer Howard Franklin. 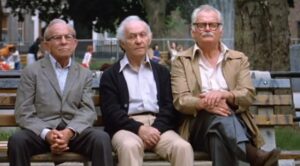 #7) “Going In Style.” Don’t even bother with the horrible 2017 remake. Go back to the original. In 1979, director Martin Brest (who would go on to make “Beverly Hills Cop,” “Midnight Run,” and “Scent Of A Woman”) made a little movie starring three veteran actors: George Burns, who had resurrected his career a few years earlier with “The Sunshine Boys” and “Oh, God”; Art Carney, the “Honeymooners” sidekick who had returned to stardom with “Harry and Tonto” and “The Late Show”; and Lee Strasberg, one of the most famous acting teachers ever. They play three old retired men who live together, go to the park, and basically just hang around, collecting social security and pension checks. Bored of sitting on a bench with not much else to do, on a whim, they decide to rob a bank. Unlike in the lousy retread, they don’t do it for revenge, but because they need something to feel alive. “Going In Style” is more a character study than a crime stsory, but watching the trio of acting legends is simply a pleasure. The scenes in Vegas with Burns and Carney are the cherry on this delicious sundae. 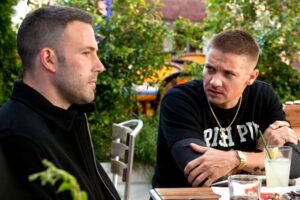 #8) “The Town.” Ben Affleck leads a gang of thieves (including Jeremy Renner) in nuns’ outfits and masks who rob a bank and hold the assistant manager (Rebecca Hall) hostage. But Affleck is attracted to her, and since she doesn’t have any idea what he looks like in real life, she falls for him, too. But the romance doesn’t get in the way of the robbers’ plans, which grow larger over time. Jon Hamm adopts a bad Boston accent as the FBI agent charged with solving the crimes. The cast also includes the imposing Pete Postlethwaite, Titus Welliver, Chris Cooper, and Blake Lively. 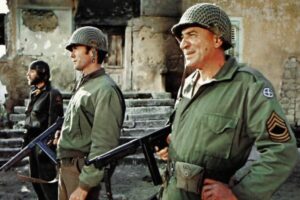 #9) “Kelly’s Heroes.” During World War II, Clint Eastwood discovers that the Germans have 14,000 gold bars stored in a bank behind enemy lines, and wants his unit — run by Telly Savalas — to go get it. Truth be told, the scenes in and around the bank don’t show up until well into the movie, but it’s getting there in the midst of a war that makes the movie so much fun. If that’s not enough, you get Donald Sutherland as commander of a rogue US tank group with Gavin McLeod making sure the vehicles run (and bugging Sutherland with negative waves). Also caught up in the escapade: Don Rickles, Stuart Margolin, Harry Dean Stanton, and the pre-Archie Bunker Carroll O’Connor. 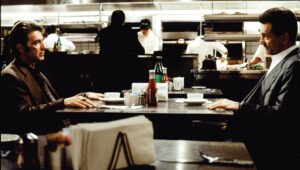 #10) “Heat.” Michael Mann’s on a press tour promoting the novel he wrote as a sequel to this movie, so I went back and watched it for the first time since it came out in 1995. It’s better than I remembered, thanks to Robert De Niro as the leader of a group of thieves and Al Pacino as the police detective determined to catch them in the act. As opposed to “Dog Day Afternoon,” this is the bluster-filled Pacino at full boil while De Niro plays it calm and cool. Using the real streets and buildings of downtown Los Angeles, Mann ramps up the action without sacrificing the stories behind his characters, including Val Kilmer and Tom Sizemore as members of De Niro’s gang. There’s also a love interest played by Amy Brenneman, Ashley Judd as Kilmer’s wife, and yet another stellar supporting ensemble: Jon Voight, Mykelti Williamson, Wes Studi, Ted Levine, Dennis Haysbert, William Fichtner, Tom Noonan, Hank Azaria, and the then-fourteen-year-old Natalie Portman. “Heat” marked the first time De Niro and Pacino appeared on screen together, and it’s fascinating watching them play a verbal chess game while sitting down over coffee in a diner.