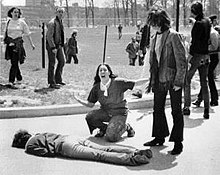 Darryl Parks wonders if “Ohio” — the devastating song Neil Young wrote (and recorded with David Crosby, Stephen Stills, and Graham Nash) after seeing four college students killed by National Guardsmen during a Vietnam War protest at Kent State University in 1970 — would have a chance of being played on radio today. Consider that many corporate-owned stations wouldn’t play it back then:

“Ohio” was indeed banned by many big city AM stations in 1970 due to the line about “Nixon coming.”  Ownership felt it was a harsh criticism of the then administration.  And who really wanted to be on Nixon’s famous “Enemies List?”  They weren’t really sure how their audiences were going to react either.  In fairness it was a confusing time for most, regardless of their generation. As the years pass, time always seems to provide focus in helping to understand events like this.

That didn’t stop FM progressive rock stations and college radio stations from playing the song, though. Many of these FM stations were run by mom and pop owners, unlike the consolidators of today which own hundreds of stations. Back then, many of these stations, especially FM stations, spoke for, identified with and advocated for groups of people. Today we call this a “social network,” but it’s something that’s been homogenized out of today’s radio.

Sparks’ conclusion? Today’s radio companies don’t want to ruffle feathers in Washington at a time when they’re pushing for more changes to further deregulate the industry. So…

Would the consolidators risk their futures by doing what may be right and playing a 3-minute song? I doubt it.