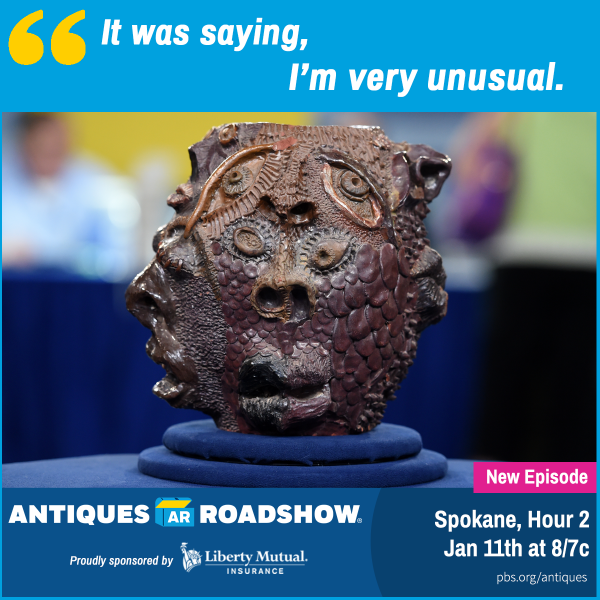 I love this story about the guy who took a “Grotesque Face Jug” to be appraised on the PBS show “Antiques Roadshow,” and the expert appraiser, Stephen Fletcher, loaded up the bullshit wagon like an 8th grader finishing an essay that’s due in five minutes:

Fletcher: There are grotesque face jugs out there.. .. When we turn this around, there’s a whole variety of, well, characters, and this particular person looks like he had an eye injury. They’ve stitched his eye closed. They all have very distinctive characters or personalities. This person speaks with a forked tongue, it would seem. There’s a little damage here and there. For example, this particular face looks like his tongue was stuck out at us. So we’ve been spared that. When we look at the base clay, it’s red ware, and the potter has used an impressive array of techniques to come up with this extraordinary texture. This, in its own way, is really over the top. It’s bizarre and wonderful. You even see a little bit of, like, Pablo Picasso going on here. It’s a little difficult to identify precisely when this was made, but I think it’s probably late 19th or early 20th century… Probably its origin, it’s coast of the United States, maybe Middle Atlantic states headed southward. Estimating its value is a little difficult. I think in a retail setting, somebody might well ask in the area of between $30,000 and $50,000 for this.

Well, not quite. The thing turned out to be a high school art project from the 1970s, not an antique.