Bill Courtney, Against The Grain 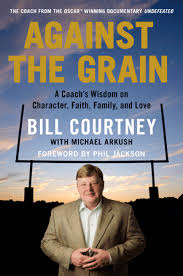 In March, 2013, I wrote a rave review of “Undefeated,” a documentary about Bill Courtney, the owner of a lumber business who volunteered as football coach at an inner city school in Memphis, Tennessee. His unique leadership skills turned around a team that hadn’t had a winning season in years. The movie won the Oscar for Best Documentary. When I tweeted a link to my review, Bill saw it and sent me a thank you note. I then asked him to come on my radio show, and we had a great conversation (which you can listen to here).

Since then, Bill has toured the country giving speeches and working on his book, “Against The Grain: A Coach’s Wisdom on Character, Faith, Family, and Love.” It was published this week, so he returned to my show to talk about it. We touched on his recent meeting/webcast with Pete Carroll (head coach of the Super Bowl champion Seattle Seahawks), the importance of daring to leave your comfort zone, and how you deal with players (and others) who can’t do something vs. those who won’t do something.

I also had Bill explain what a “turkey person” is. Listen, then click here to subscribe to these podcasts via iTunes!