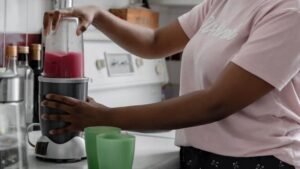 I was playing in the Bellagio poker room in Las Vegas a few days ago when a waitress came by to see if anyone wanted a beverage. I asked for a Strawberry Julius, which is essentially liquified sugar and ice with some strawberry flavor. She responded, “I’m sorry, our blender broke a few days ago.”

To which I replied, “Blender, singular? This place only had one? And it wasn’t immediately replaced? In an upscale resort owned by one of the world’s largest casino companies? The day-shift supervisor should call the night-shift supervisor and tell them to stop at Wal-Mart on the way to work and buy a blender, for which they will be fully reimbursed. Or maybe get one delivered tomorrow from Amazon. The fee the players are charged to rent a spot at the table for a single hour should cover it. How can days go by without this problem being solved?”

Okay, I only said those things in my head, not out loud, because I knew it wasn’t the server’s fault, so berating her wouldn’t make a Strawberry Julius magically appear. Instead, I asked for a bottle of water.

This wasn’t the first time I have encountered this scenario.

My wife and I once went to a Burger King drive-thru at lunchtime and the window clerk told us they were out of ketchup. Huh? At a restaurant that serves burgers and fries you’ve run out of your most-used condiment? Hey, look over there on the other side of the parking lot. That’s a supermarket. Why doesn’t someone on your staff take $20 out of petty cash, walk over there, and buy some Heinz? Again, there was no reason to take this out on the minimum-wage earners inside the building, but surely the manager (i.e. the 19-year-old who had worked there for more than six months) had the power to authorize the purchase, or at least call the franchisee and explain the problem?

Again, I said none of this out loud. Instead, we drove away and went to a nearby Wendy’s, which had miraculously managed to avoid the Great Ketchup Drought.

Then there was the time I ordered a milkshake in a diner and was told they had run out of ice cream. I shared that story with a friend and he said he’d been to a Taco Bell that had run out of soft tacos.

Is nobody keeping an eye on inventory in America?