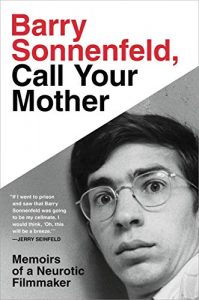 Barry Sonnenfeld has had an amazing life. He started his professional career as a cinematographer, working with the Coen Brothers (“Blood Simple,” “Raising Arizona,” and “Miller’s Crossing”), Penny Marshall (“Big”), and Rob Reiner (“Misery”, “When Harry Met Sally”). Then he was given a chance to direct and proceeded to make “Get Shorty,” two Addams Family movies, three Men In Black movies, and more.

But looming over his entire life was his troubled childhood, with the most passive-aggressive mother ever, a father who barely supported the family, and a cousin who molested him (and other youngsters) repeatedly. As if that wasn’t enough, he survived a plane crash, a mugging, and a tendency to throw up at the drop of a hat.

Fortunately, Sonnenfeld is a great storyteller, a talent he showed off several times on David Letterman’s shows. Now he’s compiled many of those tales into an autobiography, “Barry Sonnenfeld, Call Your Mother: Memoirs Of A Neurotic Filmmaker.”

It is a quick, breezy read that had me shaking my head in disbelief as often as it had me laughing out loud. Sonnenfeld doesn’t pull any punches about his own anxieties, nor about the people who have crossed his path and made his life tougher. Besides his relatives, Marshall, producer Scott Rudin, and Warren Beatty come off as serious jerks.

He doesn’t go into detail on every big screen project he’s made. There’s too little information on the original “Men In Black” and nothing at all about his big-budget box office bomb, “Wild Wild West,” but the book still contains plenty of stories about other movies he’s made and the personnel who have worked on them.

Over and over again, I found myself amazed he was able to have a successful, creative career. But the book also made me think of the millions of people who suffer similar traumas but are never able to overcome the stigma and shame they feel, much as women who have been raped have to carry the burdens of that horribly invasive crime for their entire lives. I’m glad Sonnenfeld was able to survive those real-life nightmares and share them, along with his successes, with us.

My wife and I both recommend “Barry Sonnenfeld, Call Your Mother.”