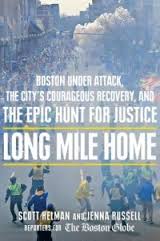 Tuesday will mark the one year anniversary of the bombings at the Boston Marathon, when an entire city was shutdown, its residents told to “shelter in place,” and the nation watched as authorities tried to figure out who had caused the carnage near the finish line. The story is the subject of a new book, “Long Mile Home,” by Boston Globe reporters Jenna Russell and Scott Helman. The latter joined me on America Weekend to talk about: