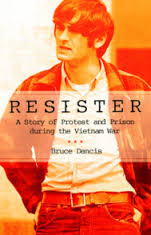 Bruce Dancis was one of the leaders of the Vietnam War draft resistance, and spent 19 months in federal prison for his actions. He joined me on America Weekend to talk about those anti-war years and his new book, “Resister: A Story of Protest and Prison During The Vietnam War.”

We talked about the day he publicly tore up his draft card at Cornell University, why that school was such a hotbed of anti-war activity, and whether he met other protesters in prison. I also asked Bruce what impact the movement had on ending the war, what Vietnam Vets have said to him, and whether he thinks we’ll ever have a draft again.