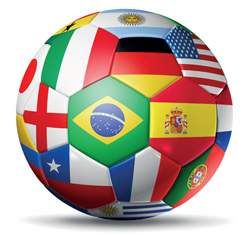 If you believe the media hype, the whole country is caught up in World Cup fever. Sports bars are full of soccer-loving fans, offices are full of people discussing every game, and the TV ratings are higher than anything else on the air.

Yes, the ratings are high, but as my colleague Ian Geisz points out, the Olympics get a lot of viewers, too. But since the Winter Games ended a few months ago, no one has watched skiing, skating, or curling. We watch because: a) there’s nothing else on; and b) both the Olympics and the World Cup happen every four years, not every weekend.

Yes, lots of kids play soccer in the US. It may be the second-most-popular participation sport to American youth, after Little League Baseball (in fact, I see a lot more kids on soccer fields than on baseball fields). The problem is that when they grow up, and no longer play the game, they don’t care to watch others play the game.

We saw a similar level of interest — and chants of USA! USA! USA! — fifteen years ago when Mia Hamm, Brandi Chastain, and the rest of the US team won the Women’s World Championship. That sparked interest in the sport from a lot of girls, but it did not translate into a successful professional soccer league for women. For that matter, professional men’s soccer hasn’t exactly taken root in most of the US, either.

Yes, soccer is the most popular sport in the rest of the world, but that’s because other nations don’t have the NFL, Major League Baseball and the NBA. We like watching those sports because we understand the rules and can see plays as they develop. Even the NHL can’t catch up because most people, even if they can see the puck, have no idea what the penalties are or how shootouts work. And that’s exactly the problem soccer has in the US.

It’s unfathomable to us that games of such importance would end in a tie. While that happens occasionally in the NFL regular season, it can’t happen in the playoffs, and certainly not in the Super Bowl, World Series, or NBA Championship Series. If the World Cup is the most important soccer tournament in the world, how can there be ties?

After the US-Portugal game ended 2-2 on Sunday, I saw a TV report with the headline, “A Stunning Tie.” No, a tie can not be stunning.

Then there’s the whole concept of stoppage time. It’s as if the rest of the world bought a stopwatch that wouldn’t stop. So, when the clock starts at the beginning of each half, it keeps ticking and ticking no matter what happens — substitutions, players hurt, penalties, even a break to give the players water so they don’t die in the Amazon heat. Nothing stops the clock. Then, at the end of each half, one of the referees announces approximately how much time had accumulated during those stoppages and play continues for several more minutes.

Approximately? Why not just stop the freaking clock? How can you play a game where you have no idea when it will end? Can you imagine if the Rams kicked a field goal to pull ahead of the Seahawks with one second left in regulation, but were then told they still had another four minutes to play? We’d be talking about NFL fans rioting, not soccer hooligans.

I was discussing this with a friend who is really into soccer and seemed insulted by my explanation of why the game will never be among the most popular spectator sports in the US. When I mentioned the low-scoring nature of the game, he asked, “Would it be better if they made each goal worth more, so instead of 2-1, it was 14-7?”

I replied that a football game with only three scores was probably pretty boring and an anomaly, but he went on, “What about a pitcher’s duel? Baseball fans always say that’s one of the most exciting things they’ve seen.” I explained that pitcher’s duels aren’t exciting, and that if every game went like that, baseball stadiums would never fill up. Americans want to see action and scoring — balls going over the wall, touchdown celebrations, three-pointers and slam dunks.

And a sport that knows how to stop the clock and start it again.