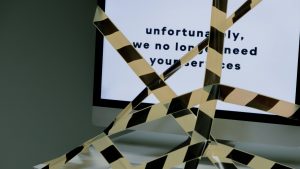 Yesterday, I wrote about CNN firing Brian Stelter, an over-achiever who hosted “Reliable Sources” every Sunday, compiled a must-read daily newsletter, and could pop up on the air any hour of the day or night to cover a story.

However, I couldn’t help noting Brian was given one final opportunity yesterday to do his show, explain why it was ending, and say goodbye. That’s a courtesy rarely afforded to radio broadcasters.

Far more often, the end comes abruptly. The radio show host is brought into the General Manager’s office and told they’ve just done their last show. From then on, no mention of them is ever made again by anyone at the station on the air or online — as if they never existed.

This is the reason why, even at stations where I worked for many years, I never filled my office with personal items. No pictures of my wife and daughter, no mementos or awards. I kept that stuff at home because I knew that, no matter how successful I was on the air, the day would come when my run would end, and I wanted the departure to be as simple as possible.

I only got one opportunity to do a goodbye show. It was after a four-year run at WHCN/Hartford as I was leaving to grab the brass ring in New York City at WYNY, the FM station then owned by NBC (when they were still in the radio business). WHCN’s program director, Dan Hayden, allowed me to spend my final Friday morning doing a retrospective of some of my favorite bits, taking listener calls, and expressing my appreciation for all that had taken place during my stint there. He knew that I wasn’t going to diss the place, since it was so important to my growth as a radio personality, and he had enough respect for our audience to allow them to know why there was going to be a change. More than a quarter-century later, I’m still grateful to Dan for how he handled my departure.

Contrast that to the first time I was suddenly thrust onto the unemployment roster. It was in 1981 at WRCN/Long Island, where I had risen from a part-time disc jockey to full-timer to music director to program director to morning co-host. I liked being on the air more than being a manager, so I gave up the PD job to concentrate on the morning show I was doing with Don Brink, the man who had hired me in the first place. We had a natural chemistry and a lot of fun on the air, until one April morning.

Barry Grant was the new PD, and as frequently occurs, he wanted to make his mark early on with some personnel changes. I was the first victim, but Grant didn’t have the guts to tell me face-to-face. Instead, Dick Adrian, the GM/owner, beckoned me to his office, where he said something about making a change and handed me my last check. Then, after a pause, he asked, “Is there anything you want to tell me about what we’re doing right and wrong at the station? Any areas you think I should address?” I sat there stunned for a moment before replying, “Dick, in the 3 years I’ve worked for you, that’s the first time you’ve asked for my input. Yes, I have lots of ideas, but since — as of 10 seconds ago — I no longer work for you, I’m going to keep them to myself.” With that, I stood up, went to my former office, grabbed my headphones and a stack of aircheck tapes and walked out the door for the last time.

At another station, WTEM/Washington, L. Steven Goldstein was the general manager who lowered the boom on my entire show. He was a know-nothing former ad exec who for some reason had been given the opportunity to run this new radio station in the nation’s capital but was in way over his head.

As I sat down in his office with my sidekick of ten years, Dave Murray, feeling like the wind had been knocked out of us, Goldstein proceeded to tell us what his plans were for a new show and direction. Since we had almost 2 years left on our contract, I interrupted him: “Excuse me, but I really don’t care what you’re going to do. All I want to know is if you’ll be mailing me my check every week, or do I have to come in here to pick it up?” Now it was his turn to be stunned, as if he had expected us to sit there and listen to his brilliant new strategy after he had fired us. I had no intention of doing that. Once again, we got up, gathered up the stuff in our office, and we were out of there (by the way, they mailed us the checks — this was before the days of direct deposit).

The way talent is treated differently by radio stations and TV networks may be a function of the press. While there are plenty of reporters covering television, there are very few who write about radio. And in radio, there are a lot fewer people involved in personnel decisions, so the chances of the news leaking out are much smaller. But there’s one even more important factor as to why radio people rarely get to say goodbye after the station tells them they’re fired — volatility. Would you want to give a live microphone on your radio station to someone whose job it is to be outspoken and opinionated right after you’ve pulled the rug out from under them? Most managers prefer not to risk it, opting to pull the switch silently and deal with the uproar later.

CNN allowed Stelter to stay on the air and spend a few minutes saying his goodbyes because they knew he wouldn’t go ballistic on them while still under contract. Try that with some loudmouth talk radio guy and you’ll have the chief engineer running faster than Usain Bolt to dump the scorched-earth audio.