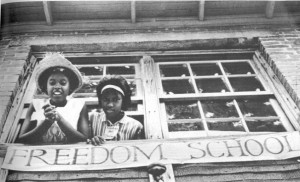 Chris Hexter was one of the college students who went to Mississippi in 1964 to participate in Freedom Summer, which is the subject of a documentary by Stanley Nelson that will air tomorrow night on PBS. The biggest part of the plan was to help African-Americans register to vote — in a state where they made up 50% of the population, fewer than 10% of them were registered, mostly because the white supremacists in power (sheriffs, mayor, registrars, etc.) wouldn’t allow them to exercise that constitutional right.

Chris, now a labor lawyer in St. Louis, joined me for an extended discussion of how he became involved with Freedom Summer, whether he knew the risks of going to Mississippi, and about his role as one of the teachers in the Freedom Schools. We also talked about the murders of Cheney, Goodman, and Schwerner (dramatized in the 1988 movie “Mississippi Burning”) that caught the attention of the nation and showed how violent the racism in that state was. Chris also discussed Fannie Lou Hamer, a black sharecropper who became of the best spokespeople for the cause — so good that she freaked out President Lyndon Johnson.

This is a compelling first-person story, and a good introduction to what you’ll see in “Freedom Summer” on PBS — which should then be shown in every school in the nation to remind people of an important part of the history of the civil rights movement.