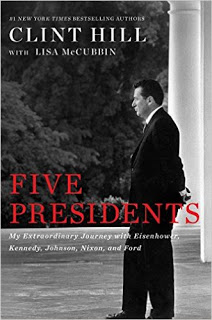 Clint Hill was a Secret Service agent for 17 years, helping to protect Presidents Eisenhower, Kennedy, Johnson, Nixon and Ford. He writes about his experiences in a new book, “Five Presidents,” and joined me to talk about it. Among the topics we covered:

Clint Hill will appear at the Missouri History Museum on Thursday night, May 19th, to discuss, sign, and sell copies of his book, “Five Presidents.”