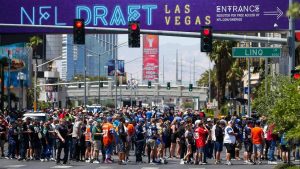 Recently, Tick Segerblom, a county commissioner in Las Vegas (whose name I couldn’t have made up if I’d tried) tweeted that Clark County should consider closing The Strip to vehicle traffic permanently to allow visitors to walk freely between properties.

It wouldn’t be the first time. The idea was considered by the county commission in 2016, but went nowhere. A few weeks ago, a portion of The Strip was closed to cars, busses, and trucks during the NFL Draft, which turned it into an open-air party. There are already several blocks of downtown Las Vegas that were turned into a pedestrian mall years ago and renamed the Fremont Street Experience, complete with a light-show canopy running from one end to the other.

But close The Strip permanently? I can see some pros and cons.

On the con side would be the traffic — estimated at 63,000 vehicles — pushed onto the parallel north-south streets (Koval, Paradise, Frank Sinatra Drive, etc.). None of them is large enough to handle all those vehicles without massive traffic jams. Then, let’s say you fly in and take a cab (or Lyft) from the airport to Bellagio, Bally’s, or Caesar’s Palace, where the only access for cars or trucks is in front. Where’s your driver going to drop you? How would deliveries get through? Are all those casino/hotels going to have to build new entrances on the other side?

As for the pros, it would reduce the near-constant surges of human flesh that fill the sidewalks adjacent to The Strip from mid-morning until late at night. Allowing everyone to spread out would make roaming from one property to another much more manageable.

I would hope that if the proposal becomes law, they would also close the cross streets (as they did with Flamingo Boulevard during the NFL Draft). That would eliminate the need to go up and down stairs/escalators at every corner, forcing a wide swath of people to merge into single lines on the overpasses. Worse is the section where pedestrians are forced to walk through a mall (Crystals) between the Cosmopolitan and Aria.

When I was in Vegas a couple of months ago (I wrote about that trip here), I had to make that trek as I walked from Aria to Encore, a journey that took much longer than it would have without those obstacles. On the other hand, with The Strip blocked to vehicles, anyone who would prefer taking a cab to hoofing it (say, after a late night at a club or poker room or show) might not find the closure to their liking.

I haven’t heard any more about Segerblom’s proposal, but even if it is approved, it may take years for the public and the industry to adjust.

Then again, who would have thought a ferris wheel in the middle of The Strip would be a hit?