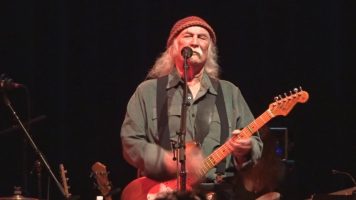 We got back in town the other night in time to see David Crosby And Friends at The Sheldon, adding another check mark to our Rockers Over 70 Bucket List.

The last time we saw Crosby he had just emerged from prison and rehab and was back on the road with Graham Nash and Stephen Stills. Unfortunately, Crosby wasn’t in shape yet and spent most of the evening standing like a zombie, barely joining in on most of the songs with a voice not yet strong enough to fill a concert hall.

This week, his voice was full and robust as he performed 17 songs over two sets — some new, some from his solo career — plus the Byrds classic “Eight Miles High.” There were also a half-dozen tunes from his earliest CSN days including “Guinnevere,” “Long Time Gone,” “Deja Vu,” “Wooden Ships,” and “Almost Cut My Hair.” Between songs, though he claimed he wasn’t stoned, Crosby’s memory was a little fuzzy — he is 77, after all — but no one seemed to mind because the music was so damned good.

The “friends” in the quintet supporting him were two women, two men, and his son James — all excellent players who have their own bands. Their backing harmonies were solid, but I couldn’t help thinking their voices could never meld with Crosby’s as well as Nash’s and Stills’ did. That vocal trio will forever define the phrase “perfect harmony.”

Watching and listening to Crosby — like seeing Nash at The Pageant last year — provided a vivid reminder of a time when rock stars not only gave us their music, but also shared their social conscience through protest songs. That came to full force when Crosby and his band returned to the stage for an encore and tore into Neil Young’s “Ohio,” a song from an era when America was even more divided than it is today.

As the audience of baby boomers sang along with every word, a giant smile formed on Crosby’s face, perhaps a recognition of how music can both lead and reflect public sentiment. Can any modern music stars lay claim to that?