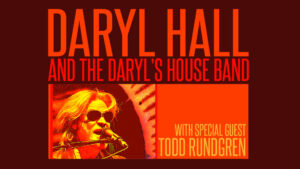 My wife and I went to see Daryl Hall in concert last night, with Todd Rundgren as the opening act, and wow, were we disappointed.

Unlike other classic rockers in their seventies, neither of these guys realize their falsetto is gone. As fans, we know age affects everyone, but other septuagenarian performers have adapted by no longer trying to hit those high notes. I witnessed both Bonnie Raitt and Pat Benatar avoid those vocal obstacles on tour recently, as did Elton John in his recent Dodger Stadium televised event (which I will write about Monday).

Frankly, Rundgren’s non-falsetto voice wasn’t on key most of the night, either. I was never a big fan of his, but knew a few songs that became hits back in the day. Unfortunately, most of his set was unfamiliar to me and most of the rest of the audience. Also, I expected that as an opening act, he’d do 45 minutes tops before yielding the stage to Hall. So when Rundgren had run through “I Saw The Light“ and then launched into his biggest hit, “Hello It’s Me,” at the 40 minute mark, I thought he was done. Wrong. He kept going and going for well over an hour total. At least we didn’t have to sit through his most insipid song, “Bang The Drum All Day.”

So, when Hall did hit the stage, did he launch into an old Hall and Oates song to get the crowd up on their feet? Nope. Instead, he did seven songs in a row that I’d bet more than 90% of the attendees didn’t know, plus a tune Daryl wrote that was a hit for Paul Young, “Every Time You Go Away,” and a cover of the Eurythmics’ “Here Comes The Rain Again” (which no one not named Annie Lennox should ever attempt).

Throughout, the crowd’s reaction was, like mine, polite but muted. At one point, Hall scolded all of us for being so quiet. That’s because we expected more Hall and Oates songs! In fact, it wasn’t until the band started playing the opening notes of their first hit, “Sara Smile” from 1976, that people got on their feet and cheered — and stayed that way for the followup, “I Can’t Go For That.”

Both Rundgren and Hall were backed by the six-piece band from the Daryl’s House video series, always a tight unit. Yet hearing Hall struggle to hit his falsetto was a little upsetting because he still has one of the all-time great blue-eyed soul voices, but every time he went for the high notes, I wished he hadn’t. Don’t go for that, Daryl.

Rundgren joined in for an encore mini-set, including his “Can We Still Be Friends,” and then Gamble and Huff’s 1967 classic, “Expressway To Your Heart” (originally sung by the Soul Survivors). The night wrapped up with another H&O hit, “You Make My Dreams Come True.”

But that made only three Hall and Oates songs all night, which is not what we or many others in the audience had expected. Combined with Rundgren’s hour of dystopia (you see, he once had a band called Utopia), the whole thing felt like a waste of our time and money. That’s the first time we’ve had that experience since, well, I can’t remember the last concert we walked out of disgruntled.

I hope it’s a long time before we have to endure another one — hopefully without the broken falsettos.