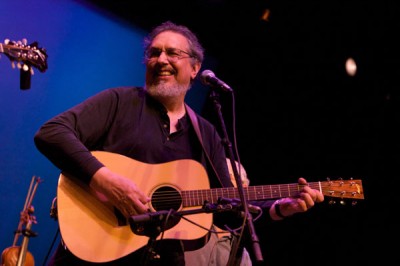 Three months ago, I posted video of David Bromberg, who I first saw in concert 40 years ago. Shortly after that entry on this site, my friend Bob told me that Bromberg was coming to St. Louis, so we got tickets and went. I’m glad we did.

Bromberg is now 71 years old, but his singing and playing sound just as good as they did decades ago, with his unique mix of blues, folk, rock, and bluegrass. He’s still recording, writing, and interpreting the work of others. In fact, this tour is to promote a new album called “The Blues, The Whole Blues, and Nothing But The Blues.”

Bromberg did not disappoint. He switched from electric to acoustic guitar easily, threw in some slide work, wove several stories into the set, and played for about 90 minutes. I only knew two of the tunes — “New Lee Highway Blues” and an extended version of his classic “Sharon” — but enjoyed all the rest because he’s such a pro. On the way out, Bob told me that this was much better than when he saw Bromberg put on a lackluster show a couple of years ago. The night we went was anything but.

Bromberg appeared with his four-piece backup band at The Duck Room, a hallowed St. Louis institution in the basement of Blueberry Hill. It’s the place Chuck Berry played every month — well into his eighties. It’s not a huge room (capacity 340), but was only half full for Bromberg, so we got seats not far from the stage. I do have two minor complaints about the Duck Room and its patrons.

One is that there’s a bar in the back — only about 20 yards from the stage — where several people congregated during the show and held conversations loudly enough to be heard over the band. It was as if they were at their own social gathering and didn’t care that the 150 others in the room were there to hear the veteran musicians perform. This would be fine if it were a neighborhood bar where some cover band was playing and you didn’t have to pay to get in, but we had all forked over $30 at the door and wanted to hear Bromberg, not a bunch of muddled voice from the rear of the room. We couldn’t hear exactly what they were saying because there were three or four of these conversations going on simultaneously, but it was quite distracting. It reminded me of people who insist on standing up during a concert despite the fact that everyone around and behind them remains seated with the offender blocking their view. I’m almost certain Bromberg noticed from the stage, but was too classy to say anything.

My other complaint is about the onstage backlighting in the Duck Room. When we arrived, I noticed a series of bright blue and red lights at the top of the wall behind the bandstand pointed straight out. Surely those will be turned off when Bromberg starts to perform, I figured. I was wrong. They stayed on through the entire show, and the klieg lights in front were not bright enough to counteract those behind, so it was like watching a couple of the musicians in silhouette. That’s why the picture of Bromberg above is not from the Duck Room, but another venue — where you could see his entire face.

I’ve ranted before about venues and performers that insist on shining lights on their audience, not realizing that they’re blinding us in the same way you would if you walked up to someone in a dark room and shined a flashlight in their eyes. I was going to call this a trend, but it’s been going on so long that it’s become the industry standard. Nevertheless, it should stop. If you’re the lighting designer for any venue or act, your job is to make the stage look great, not burn my corneas.

As for Bromberg, his career goes back even another decade before I first saw him. It was interrupted in 1980, when he stepped away from performing for 22 years to work on his other passion — making high quality violins, a business he still runs out of his Delaware shop. I don’t know how often he’ll return to St. Louis, but I’m really glad I got to catch him this time around and don’t plan on waiting another forty years to see him again.

That is, if I can see him without having my eyeballs seared by the backlights.