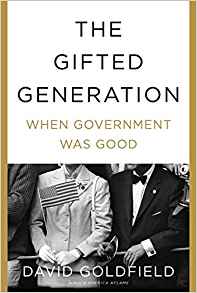 David Goldfield, a history professor at the University of North Carolina at Charlotte, has written 16 books on southern and American history. His newest is “The Gifted Generation: When Government Was Good,” which focuses on the social benefits provided to the early baby boomers under presidents Truman, Eisenhower, and Johnson.