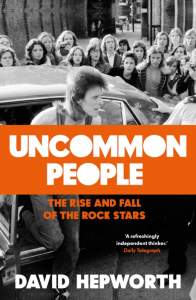 David Hepworth is a British journalist who has written about music for four decades. Now he’s published “Uncommon People: The Rise and Fall of the Rock Stars,” and joined me to talk about it. Among the topics we covered: