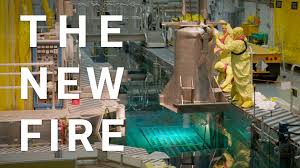 After the accident at the Three Mile Island nuclear power plant in 1979, popular opinion turned markedly against the industry, and no new plants were built for more than three decades. The incidents at Chernobyl and Fukishima didn’t help its image. But in the battle against climate change, could nuclear power be a better option than other renewables like solar and wind? Shouldn’t it at least be in the conversation?

“The New Fire” is a documentary by David Schumacher about young entrepreneurs who are trying to kick-start the nuclear power industry with new ideas. Here’s my conversation with him.

“The New Fire” will be screened November 6th at the Tivoli Theatre as part of the St. Louis International Film Festival.