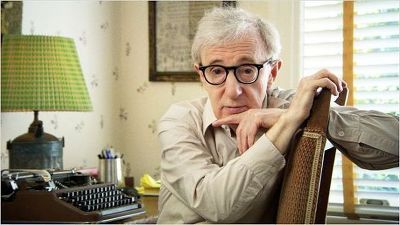 In an interview with Deadline Hollywood, Woody Allen reveals some of the scenes he cut out of early movies (e.g. “Bananas,” “Love and Death,” “Manhattan”), why he’s never seen any of his films after they were released, and why he hates them all. Allen doesn’t say that everything he’s made has been terrible, but rather that it’s difficult to go back and see the finished product, knowing he’ll find fault with something in there and be unable to repair it. As a content provider, I completely understand that. Once I’ve done an interview or a show segment live on the air, and then perhaps posted the audio to this site, I never want to go back and listen to it again. If I do, I know I’ll be yelling at myself internally, “Why didn’t you ask this question? Why didn’t you say that? Why didn’t you tell the story about the time that other thing happened?”

In another portion of the interview, Allen says he doesn’t have a computer and has never seen anything online, which seems odd considering he’s signed a deal to do a TV series for Amazon:

I don’t even know what a streaming service is; that’s the interesting thing. When you said streaming service, it was the first time I’ve heard that term connected with the Amazon thing. I never knew what Amazon was. I’ve never seen any of those series, even on cable. I’ve never seen The Sopranos, or Mad Men. I’m out every night and when I come home, I watch the end of the baseball or basketball game, and there’s Charlie Rose and I go to sleep. Amazon kept coming to me and saying, please do this, whatever you want. I kept saying I have no ideas for it, that I never watch television. I don’t know the first thing about it. Well, this went on for a year and a half, and they kept making a better deal and a better deal. Finally they said look, we’ll do anything that you want, just give us six half hours. They can be black and white, they can take place in Paris, in New York and California, they can be about a family, they can be comedy, you can be in them, they can be tragic. We don’t have to know anything, just come in with six half hours. And they offered a lot of money and everybody around me was pressuring me, go ahead and do it, what do you have to lose? And I have regretted every second since I said OK…. I haven’t had a pleasurable moment since I undertook it.

I can understand Allen’s anxiety about having to develop the idea, but I don’t believe he doesn’t know about content streaming online. Sure, he’s 79, but my mother is 90 and watches videos on YouTube and movies on Netflix. Besides, Allen’s wife Soon-Yi is 43, and they have two teenage children. While he may be a low-tech luddite, are we to believe the rest of the family doesn’t watch anything on YouTube, Netflix, Hulu, Amazon, etc.?

It seems unlikely to me that at no time in their young lives have his kids said (as my daughter has so often), “Hey, Dad, I found this online and want to show it to you.” And at the other end, with Allen’s perspective on movie history, I’d think he’d want to expose his children to works he considers important by other filmmakers — many of which can be easily accessed online.

One thing I’ve always admired about Allen, which is emphasized in the Deadline Hollywood interview, is his independence and insistence on making whatever kind of movie he wants. He doesn’t answer to a studio, never gets notes on his scripts, doesn’t even tell his investors the plot or stars of his movies. He just does what he likes, a movie a year, and the results have been positive enough that people continue to give him money. It would be impossible for every one of his projects to be a masterpiece, but he’s made more than enough classics for one lifetime — and on his own terms.