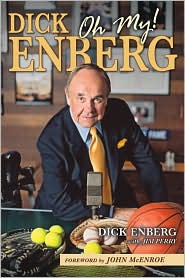 Any sporting event is made better by having Dick Enberg announce it. The man has done it all and is still at the top of his game. My wife and I loved watching him this afternoon while Melanie Oudin continued her Cinderella story at the US Open with a comeback victory against Nadia Petrova.

As always, Enberg knew when to remain silent and let the pictures tell the tale, how to best set up his colleagues John McEnroe and Mary Carillo (combined, they are the best three-in-the-booth team ever), and when to sprinkle in his Enberg-isms, those phrases that no other sportscaster uses to help underscore what we’re watching:

I’ve been honored to talk with Enberg several times over the years, but my favorite was in February, 2005, when he published his autobiography, “Oh, My!” Listen, then click here to subscribe to these podcasts via iTunes!