Don’t Dash To My Door 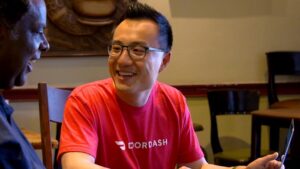 Like me, Andy Dehnart of Reality Blurred was disappointed to see DoorDash CEO Tony Xu as a guest shark on ABC’s “Shark Tank” Friday night. It’s bad enough that the week before, “Shark Tank” allowed nonsense-purveyor Gwyneth Paltrow to sit in its guest chair. But this time, the show allowed Xu to claim that his company has helped a lot of small businesses succeed, despite evidence to the contrary.

Yet DoorDash has also done the opposite of helping local restaurants and the people who deliver food for the company, accused of “predatory” tactics that “hurt” businesses and consumers.

DoorDash has actually hurt some of the small, local businesses it purports to help, even in the worst part of the pandemic.

Part of that is just its business model: DoorDash takes fees and commissions from restaurants. Last year DoorDash created new plans in response to what Eater called “industry backlash against creeping fees and diners’ overreliance on the apps.”

But those new fees range from 15 percent to 30 percent—a considerable chunk of revenue.

There’s been more egregious behavior, though. For example, DoorDash has included restaurants on its app that had refused to partner with it, still “charging both a delivery fee and higher menu prices,” Eater reported. DoorDash was sued by In-N-Out for doing that very thing.

DoorDash admitted to this practice, saying in a 2019 letter to shareholders that “listing restaurants on platforms without any partnership allowed other players to expand restaurant inventory rapidly,” and that “resulted in significant growth in both orders and new diners.”

Of course, “Shark Tank” didn’t mention any of that, nor the fact that DoorDash was caught a few years ago keeping customers’ tips instead of paying them to its drivers.

I’ve never used DoorDash because the few times I looked at its offerings in my area, they were all fast food outlets — McDonald’s, Hardee’s, Sonic, Wendy’s, Five Guys, Shake Shack — and I don’t eat that stuff. Even if I did, I wouldn’t want a not-at-all-warm burger with fries that went limp in the time it took for them to be delivered to my house. The same goes for Mexican fare from Taco Bell, Chipotle, and Qdoba, who are listed on the DoorDash site, too.

There are also breakfast places like First Watch, but how good is that going to be by the time it reaches me? I’ve been disappointed by room service breakfasts in hotels because eggs get cold within a minute of leaving the grill and pancakes aren’t much better. I’d rather go down and get some lobby waffles from the free breakfast buffet at a Hampton Inn.

Truth be told, there are only two kinds of foods that aren’t ruined by being delivered: Chinese and pizza. I speak from experience on the latter because I drove pizzas all around my hometown in high school as an employee of the Pizza Pub (I wrote about it here).

Don’t get me wrong. We’re happy to support local businesses and probably eat out more often than we should. The problem is that the only Chinese restaurant and pizza place we like don’t deliver to our neighborhood, with or without DoorDash and its competitors.

But that’s okay. I don’t mind making the dash myself, which leaves me with a smile on my face when I get back to my own door — without having a 30% delivery fee tacked on.