Either A Bagel Or A Lender Be 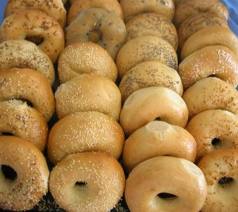 Murray Lender, the man behind Lender’s Bagels, died recently. The obit I read called him “the man most responsible for the popularity of bagels in America.” What it didn’t say was that Lender’s Bagels were (and are) terrible, mostly because they’re frozen. Bagels, like anything else made of dough, should never be frozen. They’re best when consumed fresh, or within a couple of days at most. If the store you’re buying them in didn’t actually make the bagels that day, you’re in the wrong place.

People who like frozen bagels are the same ones who refrigerate bread. That’s just wrong. Flour does not want to be colder, and certainly not that cold. But even when thawed, Lender’s don’t taste the way bagels should. They’re bland, not chewy in the right way, as if they’re nothing more than bread dough formed into a circle. Anyone who’s ever been to Bagel Oasis in Queens, New York, knows how good a bagel can be — a consistent 10 out of 10, while Lender’s never topped a 1. Anthropomorphized, those frozen dough circles would be embarrassed to discover that anyone calls them bagels.

Saying that Lender was most responsible for the popularity of bagels is like giving Domino’s credit for Americans loving pizza, proclaiming Olive Garden the home of real Italian food, or praising Radio Shack for the prevalence of smartphones.

Quantity does not equal quality — particularly when frozen.