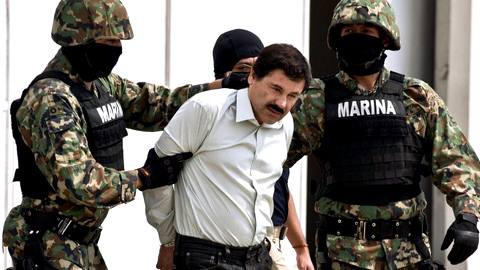 The re-arrest of Mexican drug lord Joaquin “El Chapo” Guzman, who pulled off that remarkable tunnel escape from the country’s (supposedly) most secure prison last summer, has me thinking about some movies. In particular, I’m thinking of films in which we cheer on the hero as he escapes confinement.

The list has to include “The Shawshank Redemption,” “The Fugitive,” and “Stir Crazy,” but you could argue that they’re about innocent men who didn’t deserve to be locked up. The same would apply to the World War II prison camp movies (e.g. “The Great Escape,” “Von Ryan’s Express,” and “Stalag 17”). But then I’d have to mention Paul Newman in “Cool Hand Luke.” Or Tony Curtis and Sidney Poitier in “The Defiant Ones.” Or Clint Eastwood in “Escape From Alcatraz.” In none of them do the escapees claim they were less than guilty for the crimes they were being punished for — and yet, we root for all of them to get out.

The same is true of George Clooney’s Jack Foley in “Out of Sight.” He’s a bank robber who was caught in the act, but we want him to get out of prison so he can begin his cat-and-mouse game with Jennifer Lopez’s Karen Sisco. Incidentally, her performance in that movie is the best thing JLo has ever done, and it’s a shame she hasn’t been able to repeat it — although I do like her new NBC cop drama, “Shades Of Blue,” which debuted a few nights ago. I also wish that “Karen Sisco,” the short-lived 2003 ABC spinoff from the movie, with Carla Gugino doing an equally good job with the role, had found a bigger audience.

Maybe that’s the reason we’ve been so taken with the El Chapo escape story, with its bold plot device of having members of his cartel dig an undetected mile-long tunnel — a pretty impressive engineering feat, especially since it came up right in the bathroom area of his cell — and then, when he was free, returning to his heavily fortified home, only to be re-captured by the Mexican Navy after a chase through the sewers under his compound. That’s right out of a Hollywood script.

Interestingly, no one is hoping that Tonya Couch, the affluenza mom, escapes from her prison cell, which she’s complained about because it’s too bright and she can’t sleep (prompting a perfect reply from the sheriff: “This is a jail, not a resort!”). It’s not that women in prison stories aren’t compelling, but they tend to lean too far towards exploitation, with the exception of “Orange Is The New Black.” The tale of spoiled suburbanite Tonya would have to be pitched as “Green Is The New Orange.”

As for El Chapo, he apparently recognized how good his own story was, because he’d begun making plans to produce a biopic about himself. Mexican Attorney General Arely Gomez says, “an important aspect that allowed us to locate him was that we discovered Guzman’s intention to make a biographical film, for which he established contact with actresses and producers.” I wouldn’t be surprised to hear that, although he’s back behind bars, his attorneys are negotiating with a Hollywood studio to portray his life on the big screen.

If only they can get Morgan “Red” Freeman to narrate it.