Elections Where Nobody Votes 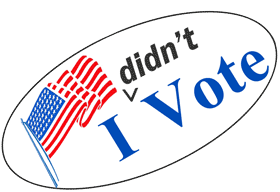 Last Tuesday was Election Day in St. Louis, and — with the exception of Ferguson, where two African-Americans were elected to the city council, giving it a racial balance of three blacks and three whites — no one really cared.

I count myself among them. Frankly, I didn’t even know it was Election Day because there weren’t any major offices or issues on the ballot and, like most Americans, I only think about voting every other November. Why hold an election in April when no one will come? The turn out would have to increase a lot just to qualify as dismal, particularly in small municipalities.

For example, here are the results of the mayoral race in the town of Kinloch: Betty McCray 63, Darren Small 18, Theda Wilson 2. Yes, one of the candidates only got two votes! I’m assuming the other vote was from her husband. Meanwhile, in Foley (with 100% of the precincts counted), the final vote for mayor was Keith Vertrees 28, Kathleen Schimpf 5, Matt Dodson 3. At least Dodson got one more vote than Wilson. What do you tell yourself the morning after the election when your tally is so small? “Well, I only lost by 25 votes.” Yes, out of 36!

Those weren’t the only low turnout stories. In Van Buren, there was a sales tax issue on the ballot. The results: ten votes for, ten votes against. So it’s still not decided!

In other small Missouri cities like St. Mary (with a whopping population of 360 residents on 390 acres), there was an ordinance on the ballot to allow the city to save money in the future by not holding elections when they’re uncontested. The tally: Yes 24, No 6. There were similar forgo-the-election ordinances on the ballot in Sycamore Hills (28-25), Wilbur Park (32-19), Kimmswick (25-9), Cedar Hill Lakes (37-9), and Bunker (21-4).

Why bother even printing ballots and setting up the voting machines for such small elections? Just invite everyone to the bar at Applebee’s, let them order some appetizers, raise their hand once or twice, and be done with it.

And do it in November, for crying out loud.