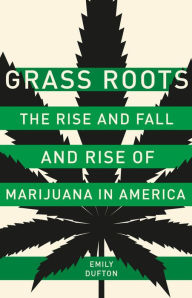 Recreational use of marijuana is legal in 8 states (Alaska, California, Colorado, Maine, Massachusetts, Nevada, Oregon, and Washington) and decriminalized in another 14 (plus the US Virgin Islands). It’s still illegal in Missouri, while Illinois is one of 29 states that allow the use and sale of medical marijuana.

All of this was made possible by the 2013 Cole Memorandum, which provided some protections from the enforcement of federal law. But that memo was rescinded by Attorney General Jeff Sessions last week, which made this a perfect time to bring Emily Dufton onto my show to discuss her book, “Grass Roots: The Rise and Fall and Rise of Marijuana in America.”

We talked about the impact of that memo being rescinded, whether weed was ever legal in the United States, and how the loosening of marijuana laws in the 1970s led to backlash in the 1980s that tightened them right back up — and whether that can happen again. We also discussed whether, in states where it’s been legalized, there’s been a commensurate increase in underage kids smoking weed. Other topics included banking problems for marijuana businesses, social justice issues about throwing users/sellers in jail, and what we know about the science of pot.