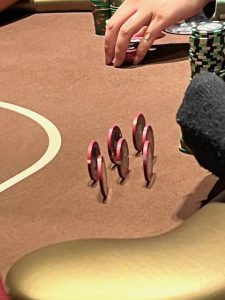 I’m back from another trip to Las Vegas where, late one night, I saw a guy balancing chips vertically on a poker table. I’ve tried this a few times while bored, but have only managed to get one chip to stand up. It’s tough because the game is still going on, which means the dealer and players are moving their hands around on the table or nudging it occasionally, which usually knocks the chips off-balance. But this guy, while not involved in a hand, just put the chips out there one after another until he had seven of them upright. Then he coolly grabbed his miracle chips and returned them to his stack as if nothing had happened. Amazing.

Another thing I noticed during the long weekend was the large number of casino employees who are paid to just stand around. I’m not talking about dealers running busy table games like craps, blackjack, and roulette. I’m talking about the many hours of the day when those tables are empty, but there’s still a dealer standing there, doing absolutely nothing while waiting for a player to sit down. Elsewhere, there are security personnel (wearing completely non-intimidating blazers) with nothing to do except watch people walk by — and not always in strategic places you’d expect them. At the hotel I stayed in, the Encore, there was always a guard making sure no one walked up a ramp that went to the back entrance of one of the bars. There was already a velvet rope across that portal to keep people out, but someone in management must have decided they needed a human to redirect customers, too. Just one example of many jobs that would have me yawning for hours on end.

Then there were the two guys I spotted on the strip wearing neon green t-shirts with the words Survey Squad on the back. They weren’t surveyors you might see as part of a road crew, measuring distances or angles or slopes. Rather, these guys were accosting passersby by saying, “Hey, boss! I’ll give you $100 in gambling if you’ll just take a 15-minute survey. It’s right over there in that building. Let me take you there!” Several things occurred to me: 1) this sounds like an appeal by the worst kidnapping gang ever; 2) what does “$100 in gambling” mean?; 3) he looked exactly like Charles Baker, the actor who played Jesse Pinkman’s meth-head friend Skinny Pete on “Breaking Bad.” Who would risk going anywhere with him? During this trip, I chose cabbies to get me around rather than Lyft drivers. It started when I had to get from the airport to Encore, and noted the taxis now charge a flat fee of $29 one way, which is competitive with the prices quoted by ride-sharing apps. They’re also more readily accessible and have caught up when it comes to technology. In that first cab, I paired the taxi number with the Curb app on my iPhone, which made it easy to simply get out at the end of the ride and have the fare paid automatically (with tip included). From then on, I only rode in Curb cabs, which were more plentiful and thus easier to find everywhere I visited. The rates are about the same as riding with Lyft and Uber, but the taxis never use surge pricing, even during the busiest hours.

I discussed this with one of the drivers, who told me it makes her life easier, too, because she rarely gets stiffed on a fare anymore. Her only complaint was when first-time tourists wanted her to drive up or down The Strip, which is almost always the slowest route, rather than the parallel streets (e.g. Koval, Sinatra). That’s bad for her because all cabbies want to pick up, drop off, and go. In their business, the more flag drops, the more trips, the better for the bottom line.

I don’t have any stories to share from my own successful weekend of playing poker, but I was happy to have dinner with my old friend Nolan Dalla at Piero’s. It’s an Italian restaurant famed for providing the setting for several scenes in Martin Scorsese’s 1995 movie “Casino,” including one in the parking lot involving Sharon Stone’s character providing oral joy to Joe Pesci’s character. Before you ask, no, there’s no plaque on that parking space. But the food was delicious.

Up the street from Piero’s I discovered a breakfast/lunch place called Bagelmania. It not only has really good bagels and cream cheese, but also a full-blown deli (e.g. corned beef, pastrami, etc.) and other baked goods, too. I’m shocked that the place has been around since 1989, which was when I first started my trips to Vegas, yet I’d never even heard of it. I have a feeling that, like my mandatory visits to Secret Pizza at the Cosmopolitan, I’ll be returning to Bagelmania on all my future jaunts to that town. On the way to the airport for my return flight, I drew a hyper-talkative cabbie. This guy loved to go on about gambling, particularly horse racing, which I know nothing about but have always viewed as animal abuse. I didn’t mention that to him, because he was off on a monologue that took up the entire 15-minute trip. He told me how much he has enjoyed betting on the ponies for the last 20 years, although of late he’s come to the conclusion he’ll need more winning tickets if he’s going to keep playing. Really? I’m just guessing he’s lost much more than he could ever win back, but he had a smile on his face as he talked.

That’s how Vegas stays in business.