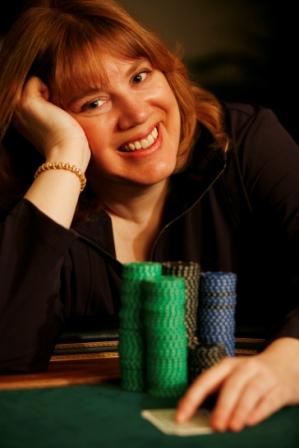 Today on The Final Table show, Dennis checked in from the Red Rock Casino in Las Vegas, where he was on a break during their championship event. He recapped about his weekend in Reno, where he played in Jennifer Harman’s charity tournament and the Nevada State Championship, including a hand he played against Men The Master Nguyen.

In our guest segment, I talked with Kathy Liebert, the winningest woman in tournament poker history. She’s been outspoken in her criticism of the top pros at Full Tilt Poker, which still hasn’t refunded money to its US players, and I asked her if she thinks that those who made millions off the site are obligated to reach into their own pockets to pay back their customers. We also discussed whether she’ll play in the Federated poker league that Annie Duke and Jeffrey Pollack are running, why she’s considering getting a condo in Florida, what it’s like to be a touring poker pro without a big endorsement deal, and her plans for the World Series Of Poker (which starts a week from today).

In our news recap, I touched on the newest phase of the online poker shutdown, which yesterday saw DoylesRoom.com and several other gambling sites seized by the US Attorney of Maryland, and one of the defendants from the Black Friday indictments pleading guilty (and likely to cooperate with the feds).