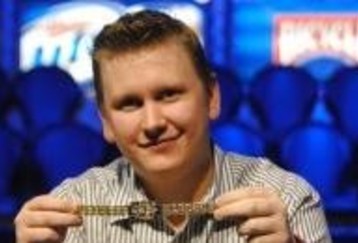 Today on The Final Table, we talked with Ben Lamb, one of this year’s November Nine for the WSOP Main Event and the leader in the Player Of The Year race (he also made the final table of the Poker Players Championship and won a bracelet in the $10,000 Pot Limit Omaha Championship). Since Ben was one of many players who lent money to Chino Rheem, we asked his opinion of the sanctions placed on Chino by the Epic Poker League (which Jeffrey Pollack alluded to on last week’s show).

Then we moved on to discuss how Ben is preparing for the November Nine, what went through his head in a big hand on Day 7 against Matt Gianetti that lasted over 10 minutes, and whether he’s learned anything by watching the ESPN coverage of the World Series Of Poker.

In our poker coach segment, Jared Tendler of StackEmCoaching.com explained how you can solve your tilt problems. We also recapped our weekend at the Hollywood Casino, where Dennis played in the Indiana State Poker Championship while I played in the PLO cash games, and got some insight from poker room manager Thomas Krauss and tournament director Kevin Dawn about how Hollywood boosted its tournament attendance 100% from last year.