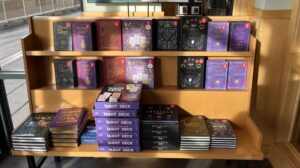 Shame on whoever it was at the Barnes & Noble at West County Center who decided to put this bench of bullshit on display. If you can’t tell from the photo, there’s a boxful of tarot cards plus books about crystals, witchcraft, and whatever the hell “moon magic” is. If the store’s gonna sell that nonsense, it should label it “Fiction — At Best.”

The NBA says it is honoring Martin Luther King Jr. with two games that will air this afternoon on TNT. Wouldn’t it be more appropriate to celebrate the holiday by giving your mostly Black player roster the day off?

In a world where scientists have developed juice for vape pens that smells like cotton candy, strawberry smoothies, and caramel, why is there no sweet-smelling weed? I haven’t taken a hit of marijuana for over 44 years, but I don’t remember it stinking as badly as the current varietals I’ve encountered on sidewalks in places it’s legal. Surely some agronomist recognizes the profit potential of growing pot that doesn’t smell like it has just been sprayed by a skunk.

I had an embarrassing moment in my home office yesterday. I threw a wadded-up piece of paper towards my wastebasket from two feet away — and missed. Did I just pick it up and drop it in? Of course not! I stepped back a little more and tossed it again. This time it bounced off the rim. Double fail! The third time was the charm. But I wasn’t satisfied, so I picked up the paper and tried from across the room, about six feet. Boom! Sometimes it’s the little victories that can make my day.

And finally… a sequel to the 1996 movie “Twister” will begin production this spring. I sure hope that this time, the tornado will return the cow.