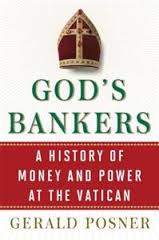 Investigative journalist Gerald Posner was back on my show today to talk about his new book, “God’s Bankers: A History of Money and Power at the Vatican.”

He revealed that the Vatican bank rivals those of Wall Street investment banks, except that its long history includes some rather sordid details (e.g. the Vatican’s connection to the Nazis during WWII, helping war criminals flee to South America, and hiding millions of dollars of mob money). We discussed how much the various popes have known about the goings-on inside the Vatican bank, how contributions in the US were affected by the pedophilia scandal, and whether the Catholic Church is trying to clean it up under Pope Francis. Posner also related the remarkable story of American archbishop Paul Marcinkus, who ran the Vatican bank for two years — while also spying for the US State Department.