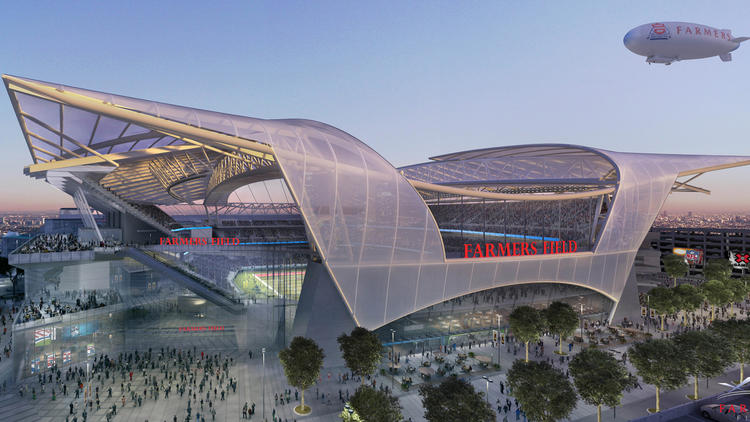 On September 7, 2014, after the St. Louis Rams lost their season-opener on their way to yet another sub-.500 season, I wrote a piece entitled, “Los Angeles, You Can Have The Rams.” Now it looks like that will become reality very soon — a story in this morning’s LA Times says that Rams owner Stan Kroenke is going to build an 80,000 seat stadium in Inglewood.

The NFL won’t let the Rams move until 2016 at the earliest, although the new venue won’t be completed until 2018. That means we’ll have a lame-duck team that’s itching to leave town, and why would any sucker season ticket holder continue to cough up their hard-earned cash to support a team with one foot out the door? This is a team that’s abandoning a fan base that still fills 88% of the seats despite a horrific record over the two decades it has been here — the Rams have managed four winning seasons out of twenty, and the wonderful sweet taste of The Greatest Show On Turf years has long since faded.

Kroenke and Company have complained about The Dome not being up to newer NFL standards, meaning it didn’t create as much income as the team would have liked, but if he wanted to, he could have built a new stadium here with his own dollars — as he plans to do in Inglewood. The Rams have complained about a lack of corporate support, but when local companies are looking at where to spend their advertising and entertainment dollars, they’ve always been better served by the Cardinals, who make the post-season more often than not and will always be the number one sports franchise in St. Louis. The only way any of the Rams can get to the post-season is by being traded elsewhere (or attending a Cardinals playoff game).

The Rams will surely find more dollars in Los Angeles, the nation’s second-largest media market, and they’ll probably sell out the new stadium for two or three seasons. But eventually LA will realize what we in St. Louis have known for a long time — this is not a very good team. And when that reality sinks in, an unfilled 80,000 seat stadium will look a lot worse on TV than the 66,000-seat venue they currently occupy.

I’m an NFL fan, and I like having a team in my city, but there are only so many seasons of suck any fan base can endure, and since the Rams keep failing to live up to their promises on the field, and now are planning to pick up and move to a new field, I say good riddance.

One last thought: although we’re going to lose the team, St. Louis will still be stuck with an empty sports venue, The Dome, which will become even more of a white elephant. I just checked the schedule of upcoming events at the venue and found exactly two — a monster truck show on January 31 and a motorcycle supercross on March 28th.

Yes, the Rams only played in the dome ten times a year (two preseason, eight regular season, none postseason). Yes, there will be other events in the adjacent convention space. But how much is it going to cost us, the taxpayers, to keep open a venue that goes unused 95+% of the time? And how much longer will the company currently paying for the right to have its name on The Dome want to keep writing that check when no one is talking about it and it’s no longer mentioned on national TV broadcasts?